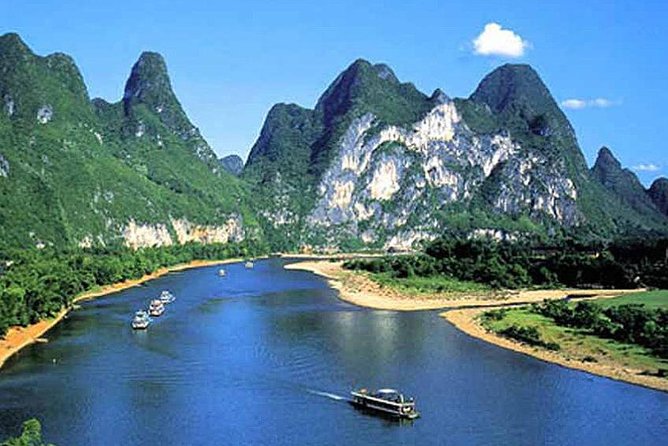 Take a day trip from Guilin along the impressionable Li River, twisting and turning through lush Chinese landscape that will have you 'snap happy' with the camera for the majority of the sightseeing tour! After some local, fresh catches for lunch on the way to Yangshuo, you will have the opportunity to indulge in a bit of shopping and maybe pick up some real bargains in pearl and jade, or fine Chinese paintings.

On this full day sightseeing tour from Guilin you'll be cruising upriver for four hours, sitting in cushioned comfort in the main cabin or enjoying the open-air viewing platform. Bring lots of film because this cruise along the Li River is a photographer's dream, and you'll want to capture the dramatic landscapes that Chinese artists have been painting for centuries.

Lunch will be served onboard, with local favorites and fresh catches from the Li River. Your destination is the village of Yangshuo, where you'll disembark and stroll amid the colorful, bustling marketplace of local street vendors. After you stretch your legs and see the sights, it's a bus trip back to Guilin to see the farms and countryside away from the river. The trip doesn't end here, because you also get a choice of shopping stops and some real bargains in pearl and jade, or fine Chinese paintings.

If you choose not to return back to Guilin right away, you will also have the opportunity to partake in some exciting afternoon activities in Yangshuo (at your own expense):

Please note that if you choose to do any of these activities, you will have to return to Yangshuo on your own. Your guide will be more than happy to help you arrange transportation back to Yangshuo.

Cruise from Guilin to Yangshuo

Bus from Yangshuo to Guilin