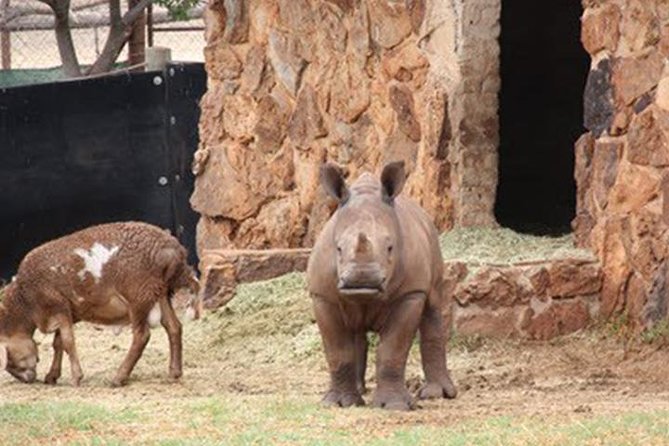 You will be collected from your hotel/accommodation in Johannesburg or surrounds at 8am by a private tour guide who will drive you out to The Cradle of Humankind area in Magaliesburg. The Lion and Rhino Nature Reserve is home to an excess of 650 head of game and includes Lion, Cheetah, Wild Dog, Rhinos, Hippo Pools, Animal Creche, Reptile Park, Vulture Hide, Predator Camp and Giraffe feeding. This park boasts 4 of the Big Five. Your guide will educate and entertain you on this trip and as an optional extra you can even explore the Wonder Caves and see stalactites and stalagmites dating back many many years.

Your guide will collect you from your hotel/accommodation and drive you out to the Magaliesburg Cradle of Humankind region. Your guide will drive you around the Nature Reserve and point out different animal species and allow for photography. Some of the animals include the White Rhinoceros, Cape Buffalo, Bison, Pygmy Hippo, Hippopotamus, Lion, White Lion, White Tiger, Siberian Tiger, Bengal Tiger, Cheetah, Clouded Leopard, Black Leopard, Leopard, Black Jaguar, Eurasian Lynx, Serval, Genet, Wild Dog, Jackal, Bat-Eared Fox, Striped Hyena, Nile Crocodile, Giraffe, Sable Antelope, Gemsbok, Arabian Oryx, Zebra, Wildebeest, Impala, Springbuck, Warthog to name a few ......... You will be taken into the animal creche where you maysee baby lions and cheetah and other baby animals. Once you have filled up your camera with memories, you will get a chance to go down into the Wonder Cave if you so choose. The Wonder Caves were discovered by Italian miners in 1898. They mined out approximately 15% from the formation and brought them to the surface. The formation consist of calcite which they placed in a self built oven for 2 week about 1100 degrees. This formed a powder which was taken by ox wagon to Pretoria & Johannesburg to make cement, toothpaste, use to extract gold and the like. Mining was stopped in 1902 due to the outbreak of war and low productivity. This is the 3rd largest chamber in South Africa, the largest being Cango Caves and second largest Sudwala Caves.
The entrance to the cave is going down 87 stairs at a 45 degrees angle dropping 22 meters below the surface. You will then go down an elevator with a drop of a further 18 meters into the cave. After the tour of the caves and the reserve, your guide will drive you back to your hotel/accommodation at around 1pm.