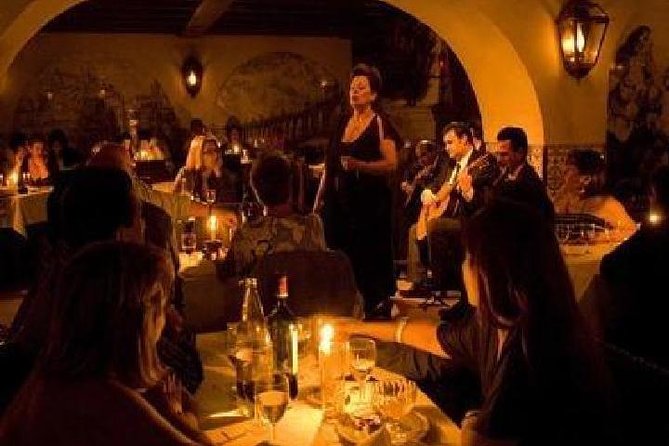 Immerse yourself in the quintessential Portuguese experience with this traditional dinner and live Fado show in Lisbon. Feast on a delicious Portuguese meala Lisboa Restaurant while enjoying live Fado music, one of Portugals most important folk traditions. After dinner, take a panoramic sightseeing tour of the city center in a comfortable, air-conditioned car. Pickup from your hotel is provided.

Get picked up from your hotel by a guide who is fluent in many languages. Travel by air-conditioned car to the Alfama district, the citys oldest neighborhood and home to many Fado performances.

After arriving at the Guitarras de lisboa Restaurant, feast on a delicious Portuguese meal featuring many traditional dishes. While dining, enjoy the sounds of the fadista (fado soloist), accompanied by classical guitar (viola portuguesa). Fado is one of the most important folk traditions in Portugal and has been declared a UNESCO World Intangible Cultural Heritage form.

After the show the driver will take you through Lisbons historic city center on a panoramic sightseeing tour. Drive past many of Lisbons most historic sights magically floodlit for the night. The driver can stop at your request for photo opportunities and will drop you back off at a prearranged location.