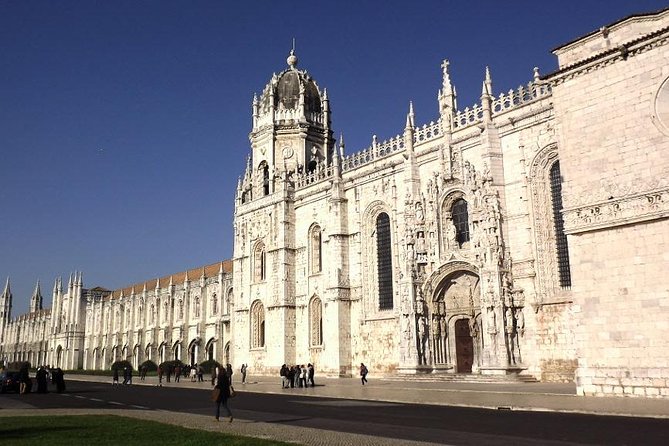 Combine a morning sightseeing tour of Lisbon with an afternoon day trip to the Catholic pilgrimage village of Ftima. In Lisbon, take a guided walking tour of the Moorish Alfama quarter, and stop for a Port wine sample at a local shop (included). See Belm Tower, the Monument to the Discoveries and the UNESCO World Heritage-listed Jernimos Monastery, and visit the Coach Museum. In the afternoon, head to Ftima, where you will visit Our Lady of Ftima Sanctuary (Nossa Senhora de Ftima Santuario) and enjoy free time to explore or attend mass.
The languages for the Lisbon Classic tour are: English, German, Portuguese and Spanish
For the Ftima Half day the languages are:English, Italian, Portuguese and Spanish

Your convenient Lisbon and Fatima sightseeing tour begins in the morning when you meet your guide in central Lisbon. Wear your walking shoes and hit the cobblestone paths with your expert leader. Steep in the history of Portugals legendary capital. In the afternoon, head to the Catholic pilgrimage village of Fatima. In Fatima, visit Our Lady of Ftima Sanctuary and explore on your own.

See the Itinerary section for details.

Lisbon Sightseeing Tour (Morning)
Meet your guide in central Lisbon or get picked up from your Lisbon hotel, and relax on a comfortable coach ride to the Alfama district. Enjoy a guided walking tour of this Moorish neighborhood, the oldest in Lisbon and the birthplace of Fado, Portugal's own music genre. Next, stop at a local shop to sample Portugal's famous Port wine (included).

Back on your coach, take in views of the Tagus River as you continue to the Belém district. Here, see Belém Tower and the Monument to the Discoveries, and visit the Jerónimos Monastery, a UNESCO World Heritage Site built in the 16th century.

Continue to the Coach Museum (entrance included), which showcases luxury coaches built for the aristocracy, and then have free time for lunch (own expense); try some local delicacies like salted cod or veil. Your guide will recommend some great places according to your preferences.

Fátima Half-Day Trip (Afternoon)
After lunch, hop back on your coach and sit back as you take in views of the Portuguese countryside on the drive to Fátima, an important Catholic pilgrimage site since 1917, when three shepherd children claimed to have seen an apparition of the Virgin Mary, also known as Our Lady of Fátima.

When you arrive, visit Our Lady of Fátima Sanctuary with your guide and see the Chapel of Apparitions, where the Virgin Mary appeared. Then, enjoy free time to explore the site at your own pace and attend mass, if you wish (and if tour time allows).

On the way back to Lisbon, admire more views of the Portuguese countryside.

There is no toilet on board the coach