Little Town Of Bethlehem Half Day Trip From Jerusalem 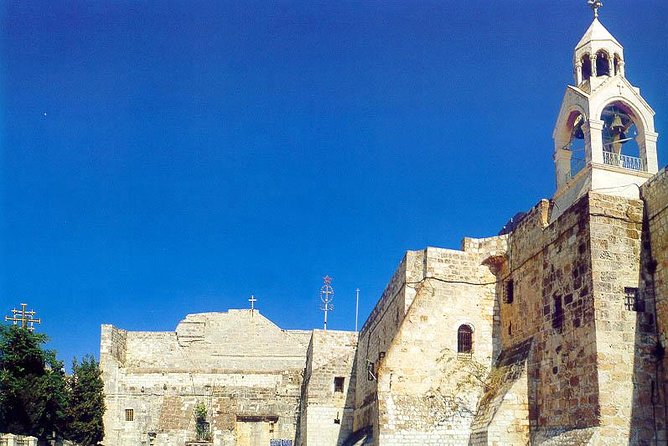 Take a half day tour from Jerusalem to Bethlehem, and discover the town famed as the birthplace of Jesus. Tracing the events of the Nativity, this comprehensive tour uncovers the highlights of this holy city for worshipers of all religions!

Your day tour begins with an air-conditioned drive south-east from Jerusalem to the holy city of Bethlehem. Focusing on the Nativity, your visit begins at the Church of the Nativity - widely cited as the birthplace of Christ, and one of the oldest surviving Christian churches in the world.

The hub of religious activity in Bethlehem is Manger Square which is flanked by the Church of the Nativity and also the Mosque of Oman - a site of importance for the many Muslims who live in the city.

At the Manger Square you can walk on the ground where Jesus was laid down after his birth.

Visit the Greek and Catholic churches, before moving onto the Shepherd Fields where the 'shepherds watched their flocks by night'. Returning by air-conditioned coach to Jerusalem, you'll take home special memories of your visit to this must-see Holy Land city.

A moderate dress code is required to enter places of worship and selected museums. Please refrain from wearing shorts. Knees and shoulders must be covered for both men and women. You may risk refused entry if you fail to comply with these dress requirements.