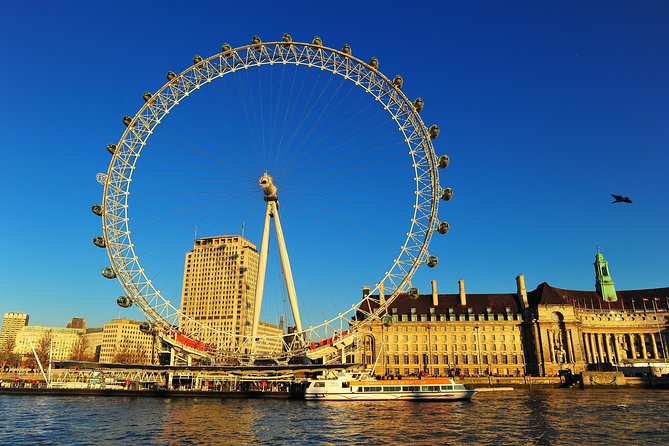 Enjoy a different view with City cruises!
Roll up, roll up. Get your combined tickets to two of London's top attractions: a trip on the London Eye and a Thames River sightseeing cruise. You'll save money on the deal and enjoy a day of panoramic sightseeing in London, the world's greatest city.

The journey through history begins at Westminster Pier, in the shadow of Big Ben's tower and just a few steps away from Westminster Abbey, where kings and queens have been crowned for almost 1,000 years. This is also the pier closest to the Churchill Museum and Cabinet War Rooms off Whitehall, the center of national government, and the Banqueting House, the last remaining building from the old Palace of Whitehall.

Across the river, County Hall, once the headquarters of the London County Council and then the Greater London Council, no longer echoes to the cries of councilors. Down below, the London Aquarium reveals the secrets of the deep while, above, visitors and business people relax in the comfort of the Marriott Hotel.

A few yards downstream see the Millennium Wheel, better known as the London Eye. In a 25 minute ride it offers spectacular views across London and far beyond.

Through the Jubilee and Hungerford foot bridges and Charing Cross railway bridge, the Royal Festival Hall recalls the post-war days when the river carried some 6million people to celebrate the Festival of Britain at this very site.

Beyond Waterloo Bridge comes Somerset House, the grand building on the north bank that was once the home of various government departments and is now a vibrant arts, heritage and entertainment center.

Beyond Blackfriars, look up the steps on the north bank for a view of St. Paul's Cathedral as you pass beneath the new Millennium Footbridge, which provides a pedestrian link with Bankside, part of the South Bank regeneration development. Among the attractions in this area are the Tate Modern art gallery and Sam Wannamaker's re-creation of Shakespeare's Globe theatre, the first building with a thatched roof to have been built in London since the great fire of 1666.

The South Bank here is the heart of historic Southwark, famed for its riverside pubs and the smallest of the capital's three cathedrals. Through London Bridge a thrilling vista unfolds: the Tower of London, Tower Bridge and the retired battle-cruiser HMS Belfast.

On into Docklands: historic Wapping and Limehouse to the north, Bermondsey and Rotherhithe to the south. Many of the old docks have disappeared while those that remain now play host to yachtsmen, weekend sailors and narrowboats.

And to the historic Greenwich, the home of time itself. The Naval College and Seamen's Hospital have taken on a new role as the main campus of Greenwich University and Trinity College of Music.

The National Maritime Museum, with its new Neptune Court and galleries, offers a fascinating and entertaining visit for all the family. These, together with the historic clipper ship Cutty Sark, the Old Royal Observatory, Queen's House, Fan Museum, traditional covered market and many more attractions form the World Heritage Site of Greenwich.

Flight on The London Eye

Bar, cafe and toilets are available on board

Please note: the London Eye is closed for Maintenance from January 11 to January 22

Please note: Customers must first collect their attraction vouchers from a City Cruises Pier, which are Westminster, Tower or Greenwich. Customers cannot enter the attraction prior to collecting their entrance tickets from the pier. Attraction tickets cannot be collected from the London Eye Pier.