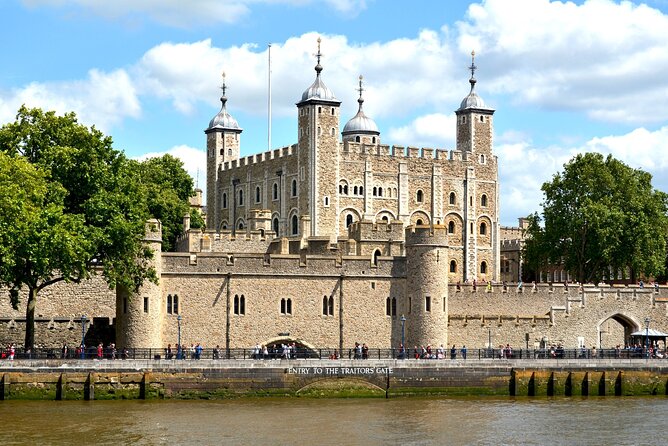 See London on a full-day sightseeing tour of the city, led by a guide. Hear the history of top London attractions like Westminster Abbey and Big Ben, and a guided tour of St Pauls Cathedral. After the sightseeing tour, watch the Changing of the Guard Ceremony at Buckingham Palace and tour the Tower of London. As a bonus, this experience also includes a one-way River Thames sightseeing cruise, which can be used on the day or another time. Upgrade to include a Standard London Eye ticket, after the tour.

A designated UNESCO World Heritage Site, the history of 'The Tower' has been intertwined with the history of England for almost a thousand years. The priceless crown jewels are held within The castle walls, along with the largest collection of medieval armor and weaponry in the country. See all of this and hear more about the tower's bloody history on a comprehensive tour with an expert guide.

Changing of the guard - Elite soldiers from the military have been guarding English Kings and Queens since 1660. Known as the 'Household Division'. During the ceremony, immaculately dressed guards are accompanied by marching bands playing a rousing mix of military and contemporary music in a display of the sort of pomp and military ceremony that has made the British military famous around the world.

Designed by the prolific British architect, Sir Christopher Wren, and taking 35 years to build, St paul's cathedral is an iconic symbol of London. One of the largest churches in the world, explore the history behind this famouSt paul|s cathedral and see the tomb of Lord Horatio Nelson, one of Britain's most revered icons.

Pass By: Mansion house of City of London, London, England

From the Tower of london, hop aboard a Thames River Cruise to Westminster Pier to enjoy London from a different viewpoint. If you prefer, you can take a cruise any other day within the decided time frame.

It will be a lovely opportunity to discover what London has to offer on this full-day guided tour!

Entry to Tower of London

Please note: St Pauls Cathedral is closed to the public on Sundays and special events or services (Closed on Dec 23& 24, Jan 26, Feb 22, Apr 07). We will stop for photographs at St Paul's Cathedral and spend longer at Tower of London instead.

You can choose to take the river cruise on another day and finish the tour at the Tower of London instead of Westminster Pier. The London Eye is a Standard Experience booked at a 6pm time-slot for guaranteed entry (if option selected).

London Eye: The London Eye ticket is for standard entry 6:00pm on the same day. This ticket can only be used for this one visit. Please show the ticket on your phone as the barcode will be scanned. Visit to The London Eye is independent

This tour/activity will have a maximum of 53 travelers