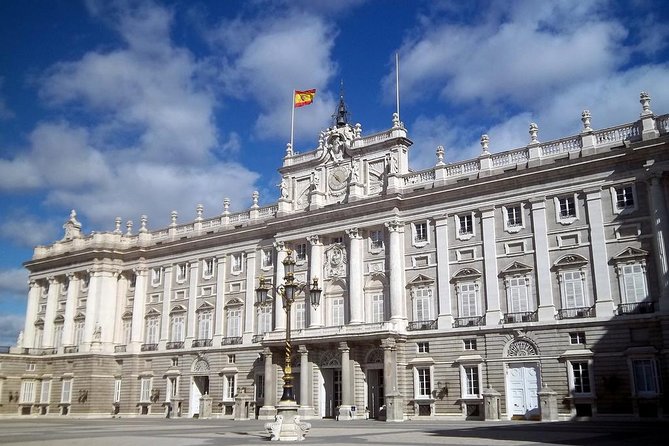 Marvel at the historic sights of Madrid on this city sightseeing and Royal Palace tour. Learn the story of Madrid through its buildings as you travel from Moorish Madrid to the Habsburg and Bourbon eras of palaces and grand squares such as Plaza Mayor and Puerta del Sol. Admire the Baroque grandeur of the Royal Palace (Palacio real) on a tour of the royal collections, and visit Madrids newest park, Rio Madrid. This tour shows you the very best of Madrid, and highlights the citys sumptuous Royal Palace.

The Royal Palace was built in the XVIII century upon the ancient Baroque Italian style fortress of the Habsburg. It is one of the most beautiful and best preserved palaces in Europe and a symbol of the permanence and consolidation of Madrid as the capital of the Kingdom. The Palace was the official residence of the Spanish Monarchy from 1765 to 1931. To date, the most stunning receptions of the Spanish Crown are celebrated there: audiences, dinner parties, signature of agreements and the traditional ceremony of presentation in which foreign ambassadors present Credential Letters to His Majesty the King.

Pass By: Gran via, Madrid

Operated by a bilingual guide in Spanish and English

Please keep in mind that the excursion includes several visits on foot, we recommended comfortable shoes.

Royal Palace visitors are kindly requested to respect the instructions of the Palace Security: Photography and filming are not permitted inside the exhibitions.

Please note that the itinerary is subject to change due to the oficial acts to be celebrated in the palace.