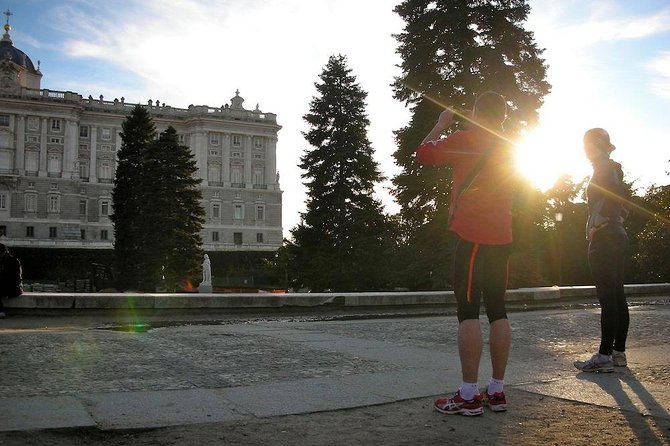 Discover Madrid on your sneakers during this Private (1-3 pax) Running Tour with Madrid OUTDOOR SPORTS. You can choose from different lengths, varying between 8km and 21km.
During these 2-3-hours private (1-3 pax) running tours, led by a guide passionate about sports and the city, you will get a complete overview of what the city has to offer while getting your exercise done.
The itinerary and starting times are flexible. Also: an additional pick-up service is available if you prefer to start at a different location than your hotel lobby. Opt for a leisurely jog at a conversational pace with stops factored in, or ramp up the speed with a fast-paced run to cover more ground. Sightsee around town, passing attractions such as the Royal Palace of Madrid (Palacio real), or explore parks like Casa de Campo or Buen Retiro Park. Its an experience to suit all: avid runners, casual joggers or business travelers wanting to escape the hotel treadmill.

Meet your guide in central Madrid, and start with a quick chat about your running experience and general level of fitness. All tours include a warm-up and stretch session plus a souvenir photo or video (your choice). Simply choose from one of the following itineraries and turn up with good sneakers and a bottle of water!

City Highlights:
Jog around the downtown streets and Los Austrias, the neighborhood thats often called Habsburgs Madrid in reference to the Habsburg dynastys architectural legacy, and see a collection of exciting monuments. Highlights include the Fountain of Neptune, Plaza mayor an elegant square lined with red-brick buildings plus the Royal palace of madrid and Plaza de cibeles, home to Madrids famous fountain of the goddess Cibele.

Temple of debod:
Start near Plaza de Espaa and work your way around Parque del oeste, a tranquil city park thats home to the Temple of debod. Stop to admire the famous Egyptian monument and hear how it was given as a present to Spain by the Egyptian government. Pose for pictures set against the backdrop of Plaza de Espaas skyscrapers and then continue jogging through the park, passing rose gardens, streams and leafy trees.

Riverside:
Start near Plaza de Espaa, run past Sabatini gardens, and then head alongside the banks of the Manzanares River a beautiful waterway that passes from Guadarrama Mountains right through the city. The route is popular with local runners as its less crowded than other central places to jog. Chat with your guide on the way, learning about the famous river and hearing how its upkeep has become one of the most expensive city projects in recent decades.

Buen Retiro Park:
Explore Buen Retiro Park, where the yearly Madrid Marathon finishes, and jog through the throngs of buskers and street performers, passing its lake and several stunning monuments. The park is better suited for leisurely jogs as there is so much to see! Stop to admire the worlds only statue of Satan El Angel Cado and marvel at the beautiful gates called Puerta de Alcal.

Casa de campo:
Explore Casa de campo, a large city park that was once a royal hunting ground, and jog around its large lake before retreating from the midday sun with a run through the forest. Often called the Green lung of Madrid, the much-loved city park is a real oasis of peace and tranquility as well as a popular competition training ground for serious athletes; Casa de Campo hosts the annual Madrid Triathlon World Cup.

Run on your level

Children between 12 and 16 must be accompanied by an adult