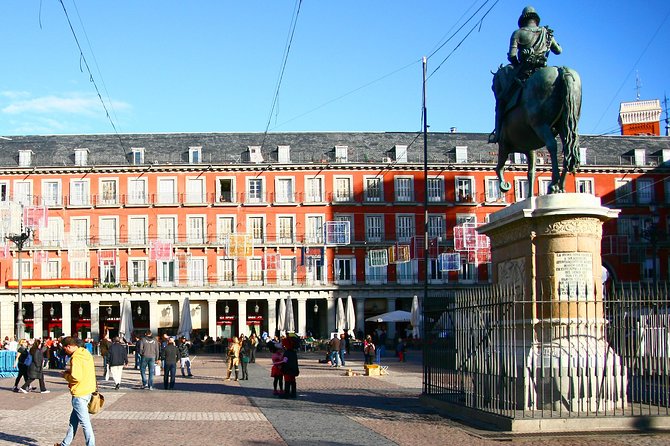 Take a walk around Madrid with a local guide, and see another side to this beautiful city. Walking with a local tour guide who shares insights and stories is the most eye-opening way to tour the classic sights of Madrid. This walking tour offers a complete overview of the city from the ground up. Virtually every major site in the city center is covered, including skip-the-line entry to the Royal Palace. Numbers are limited to 12 people on theHabsburgs tour.

Habsburgs Madrid is the name given to Madrid when the Habsburg dynasty reigned in Spain. This reign began with Charles I, who enriched the city with palaces and monuments. Later on, Philip II made it the capital of Spain and the city grew dramatically.
The journey through the Renaissance and Baroque style buildings of this era is perhaps one of the most picturesque and representative of Madrid.

The Royal Palace was built in the XVIII century upon the ancient Baroque Italian style fortress of the Habsburg. It is one of the most beautiful and best preserved palaces in Europe and a symbol of the permanence and consolidation of Madrid as the capital of the Kingdom. The Palace was the official residence of the Spanish Monarchy from 1765 to 1931. To date, the most stunning receptions of the Spanish Crown are celebrated there: audiences, dinner parties, signature of agreements and the traditional ceremony of presentation in which foreign ambassadors present Credential Letters to His Majesty the King.
We will visit the Armory Square (exterior of the palace), the Grand Staircase, the King Charles IIIs Apartments, the Queens Apartments, the Banqueting Hall, the Royal Chapel and the Throne Room and the Crown Room. After the guided tour, you may visit on your own the Royal Armory and enjoy the views from the viewpoint of the Armory Square.

Bilingual guide in Spanish and English

Free drink at an emblematic Caf during the tour

Guaranteed to skip the long lines at the Royal Palace.

Please keep in mind that the excursion includes several visits on foot, comfortable shoes are recommended.

Royal Palace visitors are kindly requested to respect the instructions of the Palace Security: Photography and filming are not permitted inside the exhibitions.