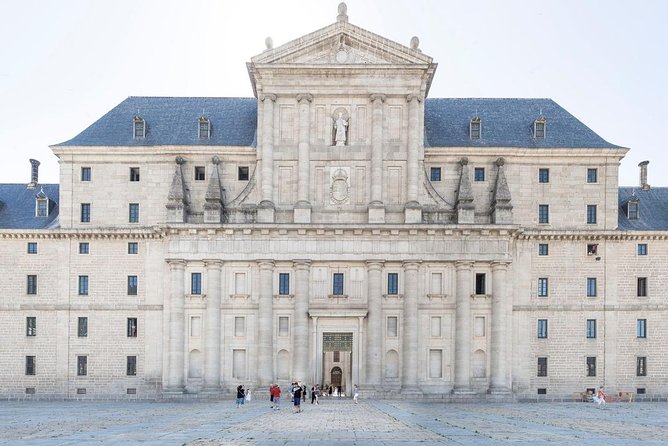 Pay less and get more on this Madrid Super Saver tour, which combines a visit to El Escorial Monastery with a half-day tour of Toledo. Spend the morning at El Escorial monastery and the Valley of the Fallen monument, erected in memory of the millions who died in the Spanish Civil War. Gain insights from your guide, who will accompany you all day, into the significance of these landmarks, which reflect the Spanish monarchy, church and 20th-century conflict. In the afternoon, youll travel to Toledo, Spain's medieval capital and a treasure trove of architecture and El Greco art. The best part? By combining these two half-day tours, youll enjoy a 10% discount compared to purchasing the tours separately.

We will start our visit at El Escorial, symbol of the Spanish power in the XVI century that commemorates the battle of St. Quentin. It is also mausoleum for Charles V. Due to the symmetry and balance of its construction, according to the humanist Renaissance style, for years it had been considered for years the eighth wonder of the world. The visit includes the Habsburg Palace, the Kings and Princes Mausoleum, the Chapter House and the Basilica.

Located 9 km away from El Escorial, this enormous monument was built between 1940 and 1959 to honor the fallen during the Spanish Civil War. The basilica is carved into the mountain at 1350 meters of altitude, where an impressive 150 meters high cross places itself over the magnificent landscape of Madrids mountain range.

"The Burial of the Lord of Orgaz", masterpiece of El Greco

Morning Tour: El Escorial Monastery
Start your day trip with a visit to the Royal Monastery of San Lorenzo El Real, built by King Philip II to house the remains of his parents, Charles I and Isabella of Portugal. The austere Renaissance complex combines a palace and monastery, and features a wonderful collection of art. Follow your guide on a tour of the complex, including the Pantheon of Kings and basilica.

Located six miles (9.5 km) north of El Escorial lies the Valley of the Fallen, a basilica built into the side of a mountain and topped by a gigantic granite cross. The monument was built by Spanish dictator General Franco to remember the casualties of Spain's Civil War. Take a guided tour inside the basilica, and admire the valley surrounding the complex.

Next, if you have chosen this tour with the lunch option your guide will take you to a traditional Spanish restaurant in Madrid. Alternatively, enjoy free time to wonder around the city at your own leisure, or grab a snack at a local cafe (own expense).

Afternoon Tour: Toledo
In the afternoon, travel to Toledo and enjoy a walking tour of the city, a UNESCO World Heritage-listed city of wonderful architecture, churches and museums. Toledo is known for its art and history, and it has a landscape that combines Arabic, Mudejar, Gothic, medieval and Renaissance architecture.

A highlight of your visit will be the sight of The Burial of the Count of Orgaz, the famous painting by 16th-century master El Greco, located in the Church of St Tome.

See the exterior of the 13th-century Cathedral of Toledo, the medieval castle, Santa Maria la Blanca Synagogue, Mosque of El Cristo de la Luz; demonstration of the famous technique of damascene (incrustation of precious metals in steel),  San Juan of the Kings Monastery and the Victorio Macho Museum.

Entrance to the Royal Monastery of El Escorial

Entrance to the Valley of the Fallen and the Basilica

Entrance to Church of St. Tom

Entry/Admission - Valley of the Fallen

Infants aged 5 years and under are free of charge, provided they do not occupy a seat

Please keep in mind that the excursion includes several visits on foot., comfortable shoes are recommended.

Royal Monastery of El Escorial, the Valley of the Fallen Basilic and St Tom Church visitors are kindly requested to respect the instructions of the Security: Photography and filming are not permitted inside the exhibitions.

Please, note that guiding inside the Basilica of the Valley is not allowed.