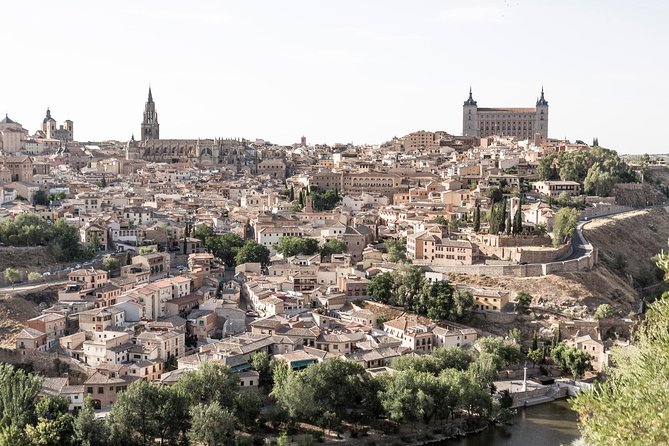 Pay less and get more with this Madrid Super Saver tour! Spend the morning in Madrid to explore its attractions on a sightseeing tour by coach. This tour is the perfect introduction to Madrid's famous sights, from the Gran via and the Castellana to the famous Plaza de Espaa, Puerta del Sol and Puerta de alcala.Then head to Toledo in the afternoon, Spain's medieval capital and a treasure trove of El Greco artwork. You'll discover a glorious city filled with amazing architecture as you walk along the citys cobblestone alleyways with your guide.

Start the tour from Julia Travel office where we take our coach and head to the Plaza de oriente, then we will arrive at the Debod Temple of must where we will stop for a walk and taking some pictures accompanied by our guide.

Pass By: Gran via, Madrid

End of the first part of the tour

"The Burial of the Lord of Orgaz", masterpiece of El Greco

The Church of Santo Tom could be substituted by the Monastery of San Juan de los Reyes.

Entrance to Church of St. Tom

Infants aged 5 years and under, are free of charge provided they do not occupy a seat

Operated by a bilingual guide in Spanish and English

Please keep in mind that the excursion includes several visits on foot, comfortable shoes are recommended.

The duration of the tour includes the round trip to the destination.

St Tom Church visitors are kindly requested to respect the instructions of the Security: Photography and filming are not permitted inside the exhibitions.