Magical Dubai With Burj Khalifa And Aquarium - With Reviews & Ratings 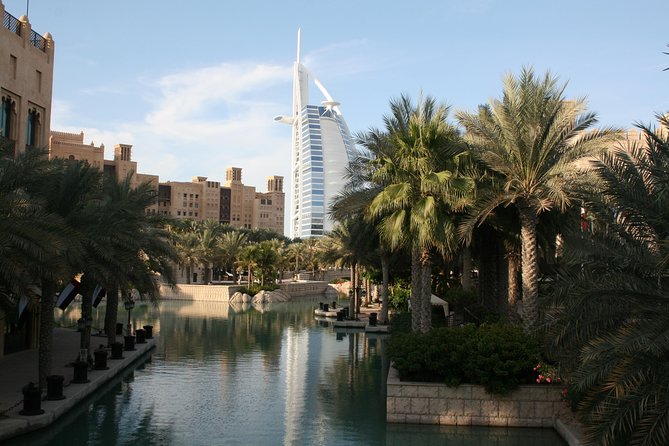 Experience the historic sites of old Dubai and the ultra-modern venues with this comprehensive tour of the city. Blending the new with old Dubai, Dubai is a city of many discoveries from traditional, culture area, gold souk to ground-breaking architecture, this modern metropolis with dazzle and memorable you from start to finish.

Get a quick view of Dubai Creek and explore the heritage area of Bastakaya with its Arabian wind towers. Visiting historical Dubai museum (225 years old Al Fahidi Fort) and see the arts, ancient history, culture and lifestyle of Arabs.

Crossing an authentic abra (water taxi) from Bur Dubai to Deira Dubai and take a walk through spice market (spice souk, where you will able to find dry fruit stuff & traditional clothes) then continue walking through Gold market (one of the famous gold souk in the world, different kind golds & diamond).

After a break, lets proceed to the crescent shaped man-made Palm Jumeirah Island and make a beautiful photo stop in front of Atlantis Hotel, which is centerpiece of Palm Jumeirah. Palm Jumeirah is the most scenic artificial man-made island on the earth, having incredible facilities such as world class accommodation, private villas, residential apartments, beaches, water sports activities and restaurants and an opportunity to see the man-made world island. visit Dubai Aquarium as well.

Experience a unique beauty of Dubai from Dubai Marina Walk (skyscrapers) which is called small Manhattan where you will find an ideal living lifestyle. There are lot of restaurants to serve different kind of food in front of Marina Canal and can experience the boat, yacht and dhow rides from the Dubai Marina Walk. There have been many instances of marine wildlife (especially whales and sharks) entering the lake, because of its proximity to the open sea.

Finally, drive through Shiek Zayed Road imposing the more skyscrapers and heading to Dubai Mall where you will have an opportunity to experience the fine dining, shopping and view Burj Khalifa (the magnificent steel structure with the height of 828 meters). The tallest building in the world which is giving an opportunity to live, stay and dine in. Enter into the genius world record with physical tickets at the tallest building in the world.