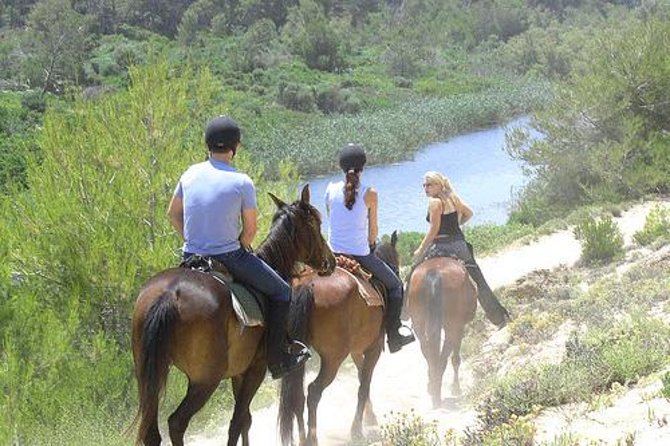 Experience a Spanish horseback-riding adventure on Mallorca, suitable for all levels. On this evening trip, enjoy a 80 minutes ride along a scenic and peaceful trail on the north coast of Mallorca. Later, enjoy a tasty dinner of barbequed meat and side dishes served with famous Spanish sangria, a type of wine punch. Finish off your horseback experience dancing to the rhythm of live country music and a horse show!

When you arrive, savor a glass of sangria as your local wranglers divide the group into beginners, intermediate and advanced levels. Then, have fun on a 80 minutes ride on your horse and enjoy the rugged outback scenery with the Mediterranean coast in the distance. Beginners and intermediate riders will enjoy some of the gorgeous forest routes, whereas advanced riders will have the opportunity to gallop along the beach or stunning country routes, depending on weather conditions. Alternatively, if you prefer not to ride you may jump on the Sangria Express, a horse-drawn wagon that will take you around the premises.

After your horseback riding experience, head to the stables and visit the mini farm of foals, baby chickens, rabbits and monkeys. Next, sit down to a delicious barbeque dinner at the ranch. Enjoy a selection of barbequed meat, salad, bread and fruit served with water, orange juice and famous Spanish sangria, a type of wine punch.

After dinner, polish your country boots and show your best line-dance moves! Enjoy live country music performed by local musicians during a one-hour celebration. You can head to the dance floor or simply sit back, grab a drink and enjoy the show.

Casual and comfortable shoes and clothing are recommended