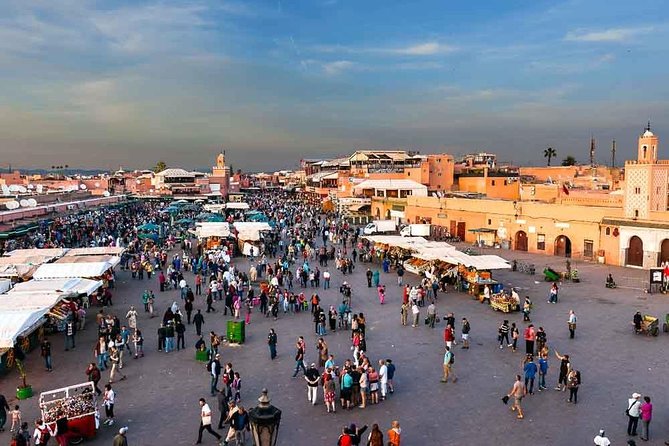 Marrakech, the pearl of the South, is a mythical city at the foot of the High Atlas. Founded in 1070 by the Almoravide Youssef Ben Tachfine, the city has witnessed a succession of wealthy civilizations and dynasties, all of which have left behind sumptuous palaces, mosques, and gardens. From the Jema Al Fna square to the souk alleys, Marrakech is the perfect expression of a never-ending cultural amalgam

One of the imperial cities of Morocco who helped shape the history of Morocco. Marrakech, remains today the fascinating capital of south and reflects the rich history and culture of the entire country.

Leave your hotel in Agadir in the morning and spend the remaining of it visiting Marrakech, the former imperial city founded in 1062. You will discover the majestic Koutoubia Minaret, which dominates the red houses, the Majorelle Garden and the Saadian Tombs; then visit the Bahia Palace, seat of the Grand Vizier Ba Ahmed and the Museum of Fine Arts IF Dar Said. Stop for lunch before continuing on to the Djemaa el Fina, the beating heart of the city, the souk of dyers, leather through the spices. Conclude your tour back in your hotel.