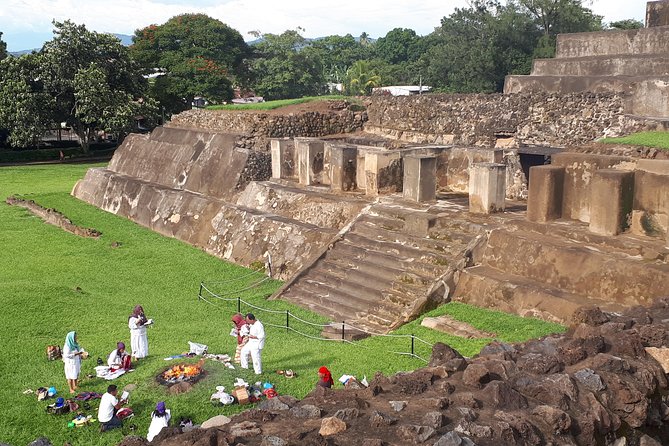 The civilization of Mayas was important for Central America , thats why we have to know its culture, daily life, sacred places, traditions and customs. The Mayan tour in El Salvador is important beacause is the only one place in Central America where you can have the opportunity to see the real life of a normal maya or popular maya.
Also, you will take your lunch in an impressive place: Coatepeque lake.
We show you the positive side of El Salvador.

Itinerary
This is a typical itinerary for this product
Stop At: Joya de Ceren Archaeological Park, Km 32, Carr San Juan Opico - Agua Escondida, San Salvador El Salvador
Joya de Cern Archaelogical site is the only one world herritage in El Salvador, thats make it unique in Mesoamerica.
Joya de Cern was one of the Mayan villages that were located in the valley of Zapotitn when in the seventh century AD. erupted the volcano Loma Caldera and the site was covered by volcanic ash from the eruptive event, thus preserving the earth constructions and the artifacts of the place, here you can see the daily life of Mayas.

Duration: 1 hour
Stop At: Tazumal, Chalchuapa El Salvador
Chalchuapa was a place where the influence of Copn came, as well as the Teotihuacan and Toltec influence. It comprises a series of structures that were the scene of an important and sophisticated Mayan settlement that existed around 100 and 1200 AD. After a long occupation, whose greater development corresponds to the Classic horizon (250 to 900 d.C.), Tazumal was definitively abandoned around 1200 AD.
Duration: 45 minutes
Stop At: Lake Coatepeque, Coatepeque El Salvador
This lake is one of the most interesting in El Salvador, we will make a short stop, beacause ,the lunch is going to be taken here.
Duration: 1 hour