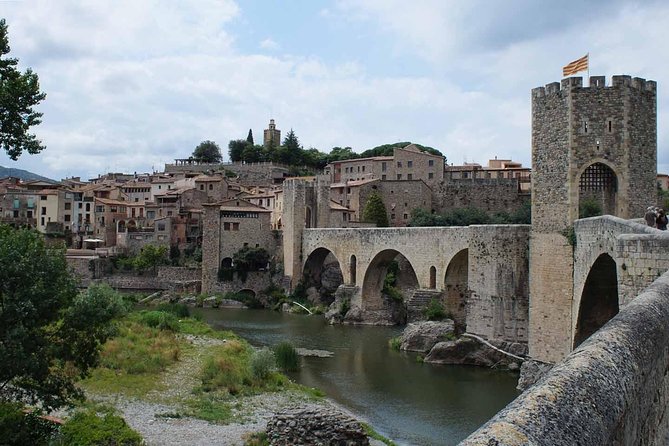 Embark on a journey to the origins of Catalonia, land of great monasteries in the cradle of the region. This private day trip fromGirona will offer you a journey through the cultural and natural heritage where every step you take and every stone you touch is filled with history. Accompanied by your own local official guide, enjoy a personalized attention on your tour.

Start your private day trip fromGirona by traveling to the Monastery of ST. Mary of Ripoll. This monastery complex was founded
by Guifr el Pels in 879 a.d. Once there you'll get the chance to discover the twelfth-century portal, known as the Bible in stone
as well as all the other romanesque elements. Entrance is included to the monastery

Then make your way to Castellfollit de la roca, Catalonia's second smallest town and Girona's smallest. Have a look at the basalt
crag where the town is situated over 50 m high and almost a kilometer long, that was formed by the overlaying of two lava flows which
are now filled by two rivers. The sight of the church and the houses high on the edge of the basalt precipice has become one of the
most photographed and painted images in Catalonia; it is also a magnificent natural viewpoint overlooking the valleys of the
two rivers. Don't forget also to walk along the old town that has its origins in medieval times, and is formed by squares and dark,
narrow streets.

Leaving Castellfollit de la roca, you'll visit Besal, ancient capital of Beasl county that extended as far as Corbires in France.
The back in time feeling will begin with the 12th century Romanesque bridge over the river. Cross the river passing its midpoint
gateway and enter the gates of this town featuring remains of medieval synagogue, the mikveh jewish bath, the Sant Pere church
consecrated in 1003 a.d. as well as small artisan traditional shops, a great chance to pick up a unique souvenir.

This tour is hosted by a local official guide, don't hesitate to list any special interests you have to alert the guide and make a
day trip that suits your interests.