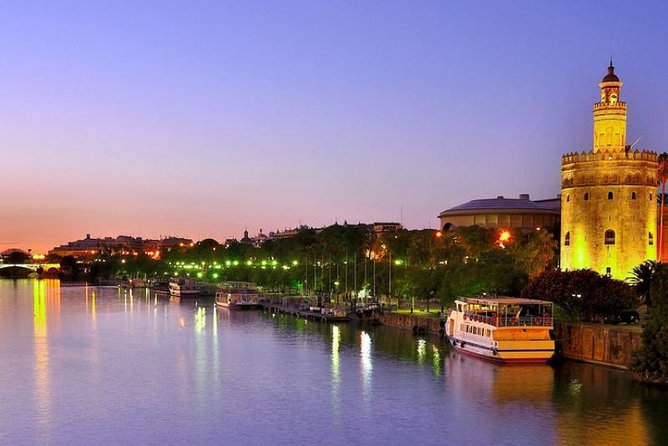 Embark on this amazing guided tour of medieval Seville! Learn of Seville's ancient myths and tales. You will also be able to enjoy a beautiful panoramic tour during your cruise on the Guadalquivir river.

For the first part of your excursion, enjoy a guided tour scouring the surroundings of the Cathedral and the Real Alcazar of Seville. You will learn of the mythical Santa Cruz Quarter, one of the most charming areas of the city. It is an amazing neighborhood with interesting stories and legends. You will also visit its Jewish Quarter with narrow streets as "Kiss Street"and romantic squares as "Santa Marta Square" or "Santa Cruz Square".

At your leisure, take a beautiful panoramic cruise at on the Guadalquivir river for approximately one hour. From the deck you can see the Bullring, the old bridges, the Triana district, and the pavilions of the Expo 92. You may also see the American Exhibition of 1929, the towers of the Plaza of Spain, convents and monasteries, including the Monastery of Santa Maria de las Cuevas, where Columbus planned his voyage of discovery.

Conclude your tour back in Seville!

A minimum of 2 Adults per booking is required

In some occasions the visit could be conducted in two languages