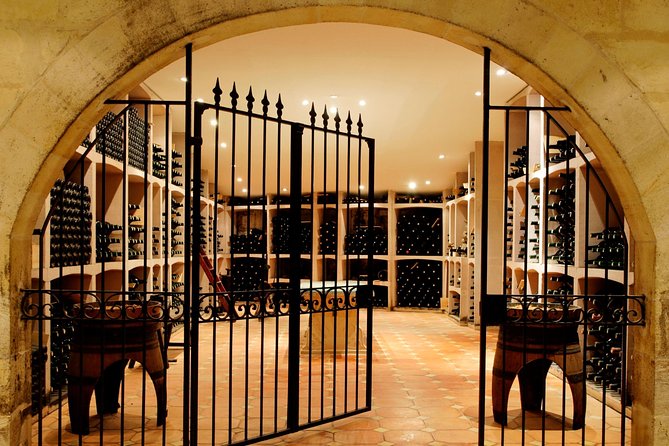 Taste your way through the famous Mdoc wine region on this full-day wine tour from Bordeaux. At three different chteaux, youll sample premium red wines that gave Mdoc its prestigious reputation with the 1855 Bordeaux classification. Your expert guide will give you the inside scoop on Bordeaux's rich winemaking heritage: learn about the regions and classification, discover the art of food and wine pairing, learn how to read a French wine label and more. Enjoy a typical French lunch at the second chteau you visit.

Board the air-conditioned coach at the Bordeaux Tourist Office in the morning and get ready for your full-day wine tour of Mdoc. Your guide will give you an overview of Bordeaux as you travel along the left bank of the Gironde Estuary to the famous Mdoc wine region.

Wine connoisseurs may be familiar with the Bordeaux Wine Official Classification of 1855. This prestigious placement resulted from the 1855 Exposition Universelle de Paris, when Emperor Napoleon III requested a classification system for France's best Bordeaux wines. Thereafter, chteaux were ranked in order of the quality of their wines.

Throughout the day, you'll visit three chteau wine estates to taste these premium Bordeaux reds. As you savor a variety of these celebrated wines, your guide will teach you all about Bordeaux winemaking.

For your first visit of the day, learn about terroir the characteristics expressed by geography, geology and climate and the different grape varieties used throughout Bordeaux, especially cabernet sauvignon, which is the most prominent in Mdoc. Trace the winemaking process from vine to bottle and learn how to decipher a French wine label. You'll also discover the art of food and wine pairing.

At the second chteau, receive an introduction to the art of wine tasting before you're served a typical French lunch to enjoy with your fellow wine lovers. Your final chteau visit will focus on the 1855 classification; what it is, how it began and how it still affects the modern-day wine trade.

After your third visit, relax on the ride back to Bordeaux, where your full-day wine tour ends.

A minimum of 5 persons is required to confirm the tour

The size of the group is 25 people maximum