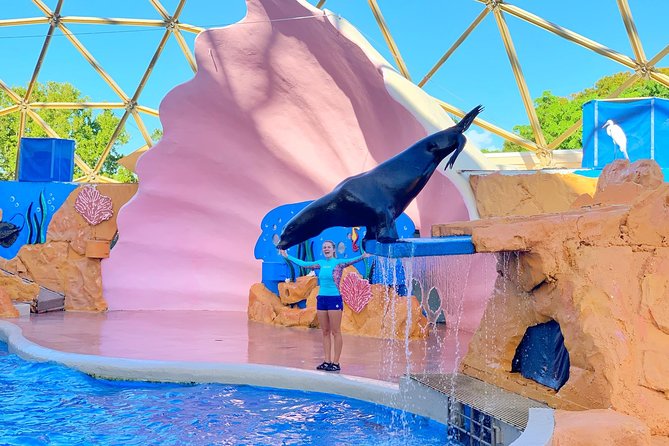 Combine admission to Miami Seaquarium with round-trip transport from Miami Beach for a convenient family-friendly experience. At the aquarium, get to know the resident marine life, from dolphins to tropical fish to a killer whale. The beautifully landscaped park overlooks Biscayne Bay.

After departing Miami beach, you'll be driven to Miami seaquarium for a day of marine-themed entertainment and education.

Your admission ticket provides access to the aquarium's exhibits at the facility overlooking Biscayne Bay. You have the opportunity to see 'Flipper' the dolphin, watch a shark-feeding show, and admire seals, sea lions, and millions of tropical fish.

Visit the Penguin Isle exhibit to see African penguins, check out the manatee exhibit for an up-close look at Florida's state marine mammal through poolside and underwater viewing areas, and head to Discovery Bay for an encounter with birds and sea turtles. And don't miss the Nile crocodiles at Crocodile Flats.

If you get hungry, a variety of food options serve hot dogs, pizza, barbecue, and more (own expense). When your time at the park is up, return to Miami beach on your provided transport.

Buses are wheelchair accessible and air-conditioned

This tour requires a minimum of 2 passengers to operate. If there are not enough passengers on the day of your tour, you will be entitled to a full refund