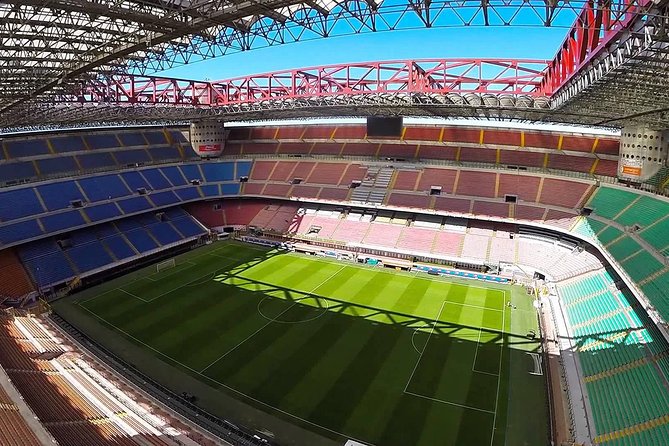 Pay homage to 'the beautiful game' in Milan, with a half-day trip to San Siro Stadium and Casa Milan. This independent football (soccer) experience includes transport by open-top City Sightseeing bus, so you can spend as long as you like at each site. Explore the public areas of San siro stadium where both AC Milan and FC Internazionale Milano (aka Inter Milan) play. Entry to the museums at both sites is also included.

Since the stadiums creation in the 1920s, it has undergone several renovations to make it one of Europes most usable sports grounds. In addition to being the shared home ground of AC Milan and Inter Milan for many years, San Siro has also hosted a boxing match, music concerts and the 1990 World Cup and Rugby Union international games.
Head inside with your entrance ticket to explore the stadiums public areas on your own. Gaze down at the pitch from the tiered seating stands, and see the press room where post-match interviews and photo sessions take place. Take a walk through the tunnel of champions to the pitch, and, if the stadium isnt too busy, you may even be able to visit the changing rooms.
Your ticket also includes access to the stadium museum, a place full of football paraphernalia with trophies, cups, shirts and more. Visit the official merchandise store to purchase souvenirs,

Casa milan is the new headquarters of AC Milan.
The contemporary new building, unveiled for the 2014-15 season, is complete with a museum, store and the Cucina Milanello restaurant. Browse AC Milan history in the museum, shop for more souvenirs and then, if option selected, visit the restaurant for a light lunch. The meals change according to the time you visit; read on to see the different options.
Lunch (if option selected):
12pm2:30pm: Starter, bread, bottled water or a glass of wine
2:31pm5:30pm: Sandwich, bottled water and dessert (muffin or a sweet pastry)
5:31pm onward: Appetizer with a cocktail (both alcoholic and non-alcoholic options available)
Please note: Light Lunch is served only until 2:30pm

Please note: How long you spend at San Siro Stadium and Casa Milan is up to you. The 4-hour duration noted above is an estimate of the time it may take to visit both sites and enjoy lunch.
Lunch (if option selected):
• 12pm–2:30pm: Starter, bread, bottled water or a glass of wine
• 2:31pm–5:30pm: Sandwich, bottled water and dessert (muffin or a sweet pastry)
• 5:31pm onward: Appetizer with a cocktail (both alcoholic and non-alcoholic options available)Please note: Light Lunch is served only until 2:30pm
City Sightseeing Line C Stops (Green Line):

Please note: Light Lunch is served only until 2:30pm