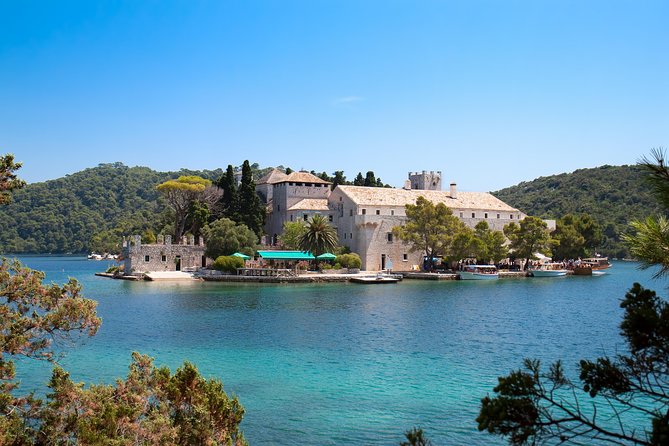 Take a full-day trip to Mljet from Dubrovnik and be enchanted by the islands special charm. Explore one of the loveliest and most densely wooded Adriatic islands as you stroll through the beautiful Mljet National Park. Enjoy a relaxing boat ride to the small isle of St Mary and discover the magnificent Benedictine monastery with your friendly guide.

After pickup from your hotel in the morning by comfortable vehicle, leave Dubrovnik with your professional guide to the port of Gruz. Here, board on a catamaran to start your exciting small-group trip to the beautiful Mljet island -- one of the most stunning islands in the Mediterranean Sea and the biggest island of the South Dalmatian archipelago. Take in the natural beauty and watch sailors cruising in the bay. Disembark at Polace on the northern coast of the island and enjoy the scenic drive to Pristanite.

Your friendly guide will take you to the Mljet National Park, which covers the entire northwest part of Mjlet. Walk along the pleasant, shaded paths and hike up the hills to enjoy the stunning scenery from hills above the Mljet coastline. Take a boat ride out onto two saltwater lakes, Veliko and Malo Jezero, which stretch for 2.5 miles (4 km), and listen as your guide gives you more insights about the national park while you sit back and enjoy floating on the lakes.

From here, take a second boat ride to the small isle of St Mary. Discover with your guide the magnificent Benedictine monastery, erected in 12th century. Then, enjoy leisure time to have lunch (on your own expense), swim in the turquoise water or take a relaxing walk on the beautiful island before returning to your Dubrovnik hotel in the late afternoon.

Transport by boat and catamaran