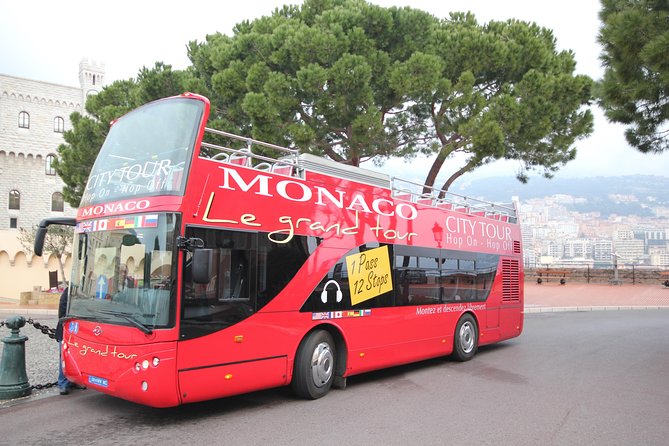 See the best of the Principality of Monaco on a hop-on hop-off tour by open-top minibus. Discover Monaco at your own pace and hop on and off as many times as you like at any of the 12 stops. See Monaco's top attractions, including the Cathedral of Monaco and the Monte-Carlo Casino. With regular departures and the option of either a one- or two-day ticket, this hop-on hop-off tour is the perfect way to explore Monaco independently.

Spend a day (or two!) sightseeing in Monaco aboard a hop-on hop-off double-decker bus, allowing you to have a wonderful sightseeing experience. Start your tour at any of the 12 stops around the city, including the Monte-Carlo Casino or the Grimaldi Forum. As the open-top minibus drives you around town, hop on and off as many times as you like to discover the best of Monaco at your own pace (full tour duration without stops is approximately one hour).

Soak in the atmosphere of the French Rivera by taking a stroll around the Port Monaco promenade to admire its luxury yachts. Discover Monaco's old town (Monaco Ville) and the Prince's Palace of Monaco. Visit the Cathedral of Monaco, built in 1875 and home to the graves of Princess Grace and Prince Rainier III.

See the Itinerary section below for a list of all stops.

Please note: During school term time, buses will not stop at the Place du Palais and Musée Océanographique stops between 11:15am and 12:20pm on Wednesdays, or between 3:45pm and 5pm on Mondays, Tuesdays, Thursdays and Fridays.