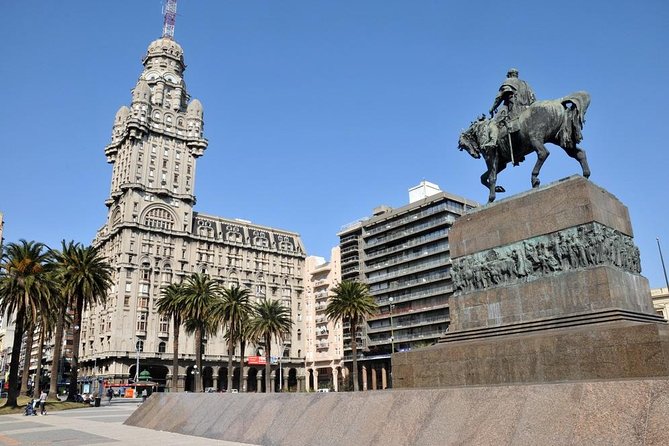 While in port in Montevideo, enjoy a private, 4-hour shore excursion of Uruguays charming capital city. With a private guide, see top attractions like Parliament Palace, Constitution Square and Independence Plaza. Youll visit several coastal barrios, learning about the distinctive design of the buildings along with Montevideos history. View the citys coastline with its picturesque beaches and stroll the waterfront walkway in Old City. You can also upgrade to include a winemaking tour at a local vineyard and a tasting of Uruguays award-winning tannat wine.

When your cruise ship docks in the Montevideo port, meet your private guide for your city sightseeing shore excursion and head first to Independence Plaza, which divides Montevideos Old City from its newer districts. A statue of Uruguay's military hero, Jos Artigas, stands at its center.

You'll discover the 26-story Palacio Salvo, built in the 1920s and once the tallest building in Uruguay, on the east side of the prominent square. Then survey the west end and see Puerta de la ciudadela, one of the last surviving structures of the old city wall that once encircled colonial Montevideo.

Next, drive along tree-lined streets through El Prado, a residential neighborhood of early 20th century mansions. See Prado Park with its rose garden and several monuments, including the Obelisk and La Carreta (Covered Wagon), before you pass through Ordonez Park. At Batlle Park, catch a glimpse of the Estadio centenario, the national soccer stadium built for the first FIFA World Cup in 1930.

Continue to the coastal residence of Carrasco to admire the 200-room Hotel Casino Carrasco, an imposing luxury hotel built in 1921 along the Rio de la Plata. Then relax as your guide drives you back to the Montevideo port.

Optional Winery Tour with Wine Tasting
If youre interested in discovering a bit about Uruguayan wine, upgrade your shore excursion to taste some of the countrys best wines on a winemaking tour. On your visit to a local vineyard and winery, learn about Uruguays winemaking tradition. Then taste an award-winning tannat wine a red wine made from tannat grapes, one of the most prominent grape varieties used in Uruguayan wine and considered the national grape.

Worry-free Shore Excursion:
We will ensure your timely return to the Montevideo port for this activity. In the rare event your ship has departed, we will arrange for transportation to the next port-of-call. If your ship is delayed and you are unable to attend this activity, your money will be refunded. See our terms and conditions for full details.

We will be operating only with private groups, only your party, and we follow government mandates.