Montreux And Château De Chillon From Lausanne - With Reviews & Ratings 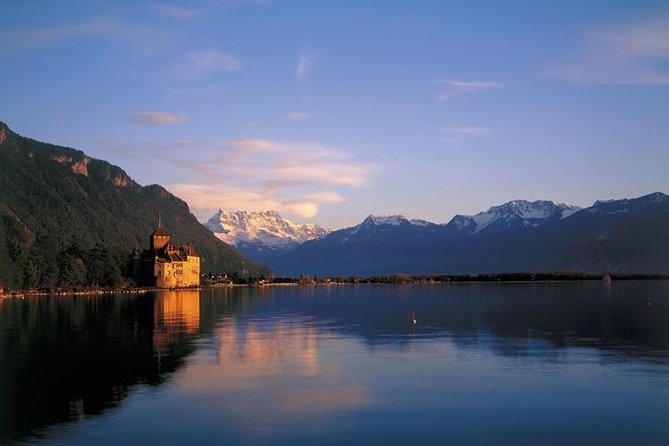 Discover the Swiss riviera through different cities situated by Lake Geneva. Vevey, Montreux and the castle of Chillon will make you travel through time. Understand all the artists, writers as Victor Hugo, Jean Jacques Rousseau or music artists as Led Zeppelin, Deep purple or Queen who fell in love with the riviera.

Discover wonderful views of Switzerland, the Alps Mountains and Geneva lake. Ride our comfortable coach from Lausanne,drive through the Vaud countryside, you will have a photostop to see the highlight of Lausanne, the Olympic committee which was created by the Baron Pierrede Coubertin in 1896.

Then continue to Corsier-sur-Vevey, spend free time in the village around Chaplins world.

Next, jump on our open trolley tour through the World heritage site of Lavaux, protected byUNESCO, also called the Wine road: a vineyard region with terraces. You will have a break in themiddle of the vines to taste some local products such as cheese, wine or grape juice.
Just beforelunch, take an overall of Vevey city, Nestl headquarters, the covered market and spend a free time
for your lunch.

In the afternoon, board again our open trolley, drive along the lake road, from Vevey to the castle ofChillon, places called the pearls of the lake. Blessed with an extremely mild micro-climate,Montreux-Vevey features a several-mile promenade with beautiful arrays of palm trees and tropicalflowers.

You will arrive to the Castle of Chillon to take some pictures.

You last stop will be in Montreux, a glamorous tourist resort. Feel the atmosphere of all the greatartists who have visited this place such as Aretha Franklin, Ella Fitzgerald, BB King, Ray Charlesand many more The emblem of the city is the statue of Freddy Mercury; he says that If you wantPeace of Soul, you should come to Montreux. This artist, who lived several years in Montreuxrecorded his last album with the group Queen, "Made in Heaven", in the Mountain Studio, which isin the Montreux Casino. You will have the chance to visit Queens old studio record. Wonder in the streets full of fancy shopping and landmarks of the famous jazz festival. Ride the bus back .

Feel the atmosphere of Montreux jazz city during your free time

This tour/activity will have a maximum of 48 travelers