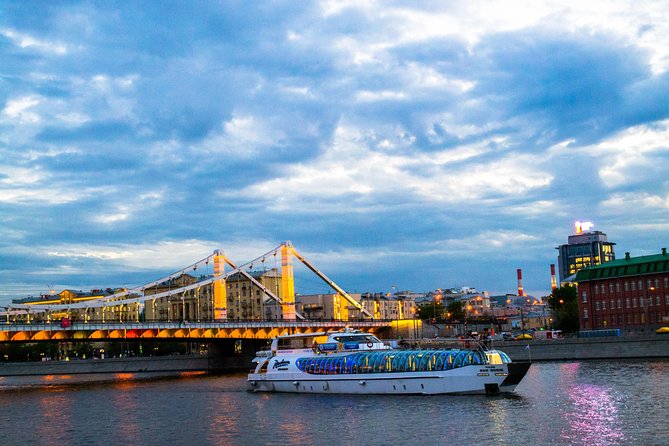 Tired of tourist crowds and want a new local experience? Get a totally different and exciting perspective on Moscow-russia">Moscow: exploreMoscowin style on board of an elegant white-snow boat brought to you by the best boat company in town. Your private guide will entertain you with fun facts and stories.
Enjoy incredible views of the city in comfort without lines, crowds and noise. See some of the worlds most famous landmarks like the Kremlin, Novodevichy Monastery, Moscow state university, Christ the Savior Cathedral and others. Learn about different epochs of the city and places you cruise through and sample a complementary delicious dessert with a cup of refreshing tea or coffee (of your choice).

Meet your private guide at the hotel at the time convenient for you (multiple start times available). Your knowledgeable local guide willgive you a brief orientation tour on your way to the dock via Moscow metro..

Hop aboard a comfortable boat for a fun 2.5-hour river cruise, explore the ship and then sit down and indulge your sweet tooth with one of the lavish desserts like apple cherry strudel with ice-cream, tiramisu, honey parfait, ricottini with strawberry sauce, yogurt and mango mousse with cherry sauce, panna cotta with wild berry sauce or milk chocolate semifreddo with caramelized hazelnut to choose from, accompanied by a cup of green tea, English Breakfast tea, wild berries mix, or Americano/Cappuccino (one dessert and one cup of tea/coffee per person).

Later, relax in a comfy armchair facing one of the boats windows while your guide will tell you amazing stories about spots you drift by. See the Government House and Moscow city hall, architectural masterpieces of the Soviet modernism, marvel at monumental Kiev railway station and the Novodevichy convent, one of the most renowned monasteries in Moscow and Russia which dates back to 1524.

See Moscow state university, one of the oldest universities in Russia and the tallest building among all Stalins skyscrapers Take a look at Luzhniki stadium, one of the largest sport complexes in the world. Hear fascinating facts about Gorky park that once was a summer residence of Russian Tsars in 19th century, The Central House of Artists which now is housing a branch of The state tretyakov gallery and the Monument to Peter I, the tallest sculptural monument in Russia designed by prominent Georgian-Russian sculptor and architect Zurab Tsereteli known for his large-scale and sometimes controversial artworks.

Admire views of Moscows magnificent skyline including the House on the Embankment,another famous Stalins Sister, and the golden-domed Christ the Savior Cathedral, the tallest Orthodox church in the world and one of the largest ones. Feast your eyes to the Kremlins unique mighty towers and ancient walls, and find out where the word Moscow comes from, as well as why its also known as White-Stone and Third Rome.

Enjoy the unusual architecture of flamboyant St. Basils Cathedral built by the Russian Tsar Ivan the Terrible in 16th century and take a glance at prestigious Kotelnicheskaya Embankment Building before you come back to the pier.

Moscow river cruise is a great opportunity to take in the views of citys beautiful bridges and scenic embankments. See the Bolshoy Kamenny Bridge, the main bridge of Moscow, and deepen your knowledge about Russian history passing by the Borodinsky Bridge, erected in honor of the 100th anniversary of the legendary Battle of Borodino.

Finish your tour at the pier, or some place in downtown where you can continue to explore the city on your own, or head back to your hotel.

Friendly local guide on private tour. (Note: the boat itself is not private, it is a public boat experience)

Must-see attractions and off the beaten path

Meeting in the hotel lobby

Private tour with the use of boat and metro. (Note: the boat itself is not private, it is a public boat experience)