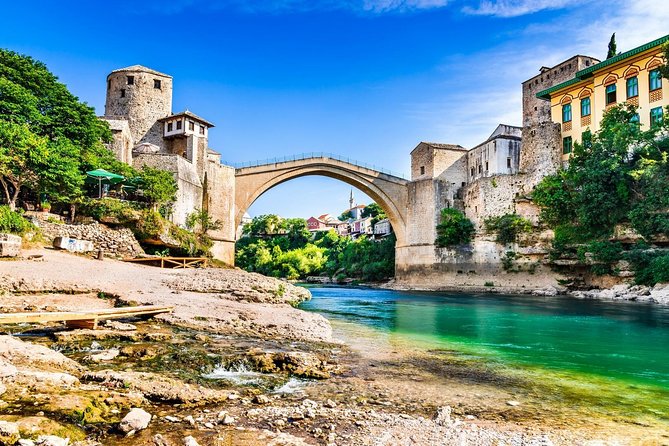 Experience Bosnia and Herzegovina on a day tour visiting the unique Old bridge in Mostar (UNESCO World heritage site) and pilgrim place Medjugorje. Discover their interesting history and must see attractions with professional tour guide. On the tour you will have the opportunity to visit walled town of Poitelj and enjoy the beauty of Kravice Waterfalls.

After meeting your tour guide in Trogir, Split promenade or at your hotel, you'll begin our day tour with a comfortable air conditioned coach drive to Bosnia and Herzegovina. Enjoy your drive while your tour guide will provide you with interesting information about the places you will visit on the tour.
On your way to the ancient Ottoman city of Mostar, after 1h and 45 min drive, you will stop for a coffee break at the walled town of Poitelj - UNESCO World Heritage site. There your tour guide will introduce you with the history of this area. Then your tour continues to Mostar, only half an hour away. In Mostar your local tour guide introduces us to the great history of this city known as 'the window to the Orient'. On a one hour guided tour you'll visit the Old Bazaar, full of picturesque shops and craft workshops, and the Mosque. After this, you'll enjoy a walk along the famous Turkish bridge from the 16thC and you'll have 2,5 hrs of free time for exciting shopping and the opportunity to taste authentic Bosnian specialties like cevapi, pita or burek.
Then it's off for a half an hour drive to experience the beauty of Bosnia and Herzegovina on your final destination, one of the most-visited pilgrimage centers in all of Europe - Medjugorje. For believers and those who are looking for spiritual renewal, the most compelling site here is the Mount of Appearance where Virgin Mary is reported to have appeared to children in 1981 for the first time. Your tour guide will help you understand and appreciate why this place of peace and compassion has become such a world-wide destination for pilgrims. You will be able to explore this spiritual place during your 2 hrs of free time. As an option, you may also enjoy some wonderful swimming in nearby Kravice waterfalls.
After this beautiful experience you return to Split or Trogir where your tour finishes on the original departure point.

Itinerary
06:45 / 07:30 Departure from Trogir / Split
09:30 10:00 Visiting Pocitelj
10:30 11:30 Mostar sightseeing with local guide
11:30 14:00 Free time for lunch and exploring on your own
14:45 16:45 Visiting Medjugorje or Kravice
19:00 Arrival in Split
*Voucher and passport check in Split: 7:20
Possibly the itinerary may be adjusted due to the traffic or bad weather conditions.
Free time in Medjugorje or Kravice can potentially be shorter depending on the time spent traveling and on the border.

All taxes and VAT.

A current valid passport is required on the day of travel. Guests are solely responsible for having valid documents during the tour.

Here are few items you may need to make your time on the excursion the best of all: Comfortable walking shoes or sandals, proper clothing for visit to a religious town - Medjugorje. Out of summer time we recommend to bring also a warm sweater and to wear closed comfortable shoes.