Mostar - The Heart Of Herzegovina Tour

Mostar - The Heart Of Herzegovina Tour 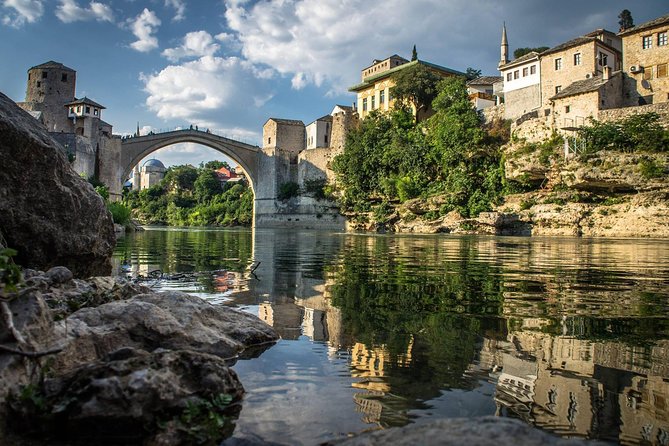 Join us in all day tour, starting from city of Sarajevo to the sunniest city in Bosnia and Herzegovina, and the heart of Herzegovina - Mostar whichis located in the valley of river Neretva, and it has an abundance of historical stories, events, and monuments waiting just for you! Take a walk around Mostar streets and see old part of Mostar with medieval structures, traditional Ottoman monuments and buildings and famous Mostar's Old Bridgeabove stunning river Neretva.After Mostar, see well known Herzegovinian vineyards, city of Blagaj, spring of the river Buna and medieval town of Pocitelj.

The tour to Mostar departs from Sarajevo or a location agreed prior to your tour booking. The history and natural wildlife of Mostar are indeed a fascination for all senses. On our tour around Mostar, you will see and hear the details and stories which make it so admirable. Mostar has a Mediterranean climate with days of extreme heat and refreshing scented Mediterranean air. The winters are cold and wet with strong bora coming from the north.

You will see the old part of Mostar with cobblestone streets, medieval structures and traditional Ottoman monuments and buildings. The river Neretva divides the town of Mostar and provides a fascinating view of the architectural and cultural view of the town. The two sides of the city of Mostar, the west and the east coast of the river, are joined by the famousOld Bridge of Mostar. The Old bridge was completely destroyed during the homeland war, but it was rebuilt and returned to its former glory and it has since become a symbol of unity of the both sides of the river. The Old Bridge is considered as the heart of the city of Mostar.

After touring the city of Mostar, we will also take you to see the Herzegovinian vineyards, then to the village of Blagaj which is located on the spring of the river Buna. There you will see the beautiful historical Tekka. The Blagaj Tekke is a national monument, once a monastery built by the Dervish society during the Ottoman empire in 1520. The architecture makes for a rich combination of the Ottoman and Mediterranean styles, a true architectural wonder for the eyes and spiritual peace. Here we will have a local lunch by the water.

After visiting the Blagaj Tekke, we will move on to the medieval town of Poitelj. This is the oldest town of Herzegovina, built within a hill and old cobblestone walls. Poitelj is a UNESCO World Heritage site because it has maintained the original form and architecture. Along with the fascinating oriental architecture, Poitelj is also host to the longest operating art colony in Southeast Europe. A wonder for the eyes is Poiteljs oldest monument, the Sahat kula, which is a fort in the shape of a silo and reaches the highest spot in the town.

Mostar and Potelj are 30km away from each other, yet they are so different in architecture and style.

Additional sites which you will visit on the tour to Mostar:The Old Traditional Turkish Home, the colorful Old Bazar, The Hadi-Alija Mosque, the Gavran Kapetanovi house, and the Sisma-Ibrahimpaa Madrasa.

Show up 10 minutes ahead of the pick-up time