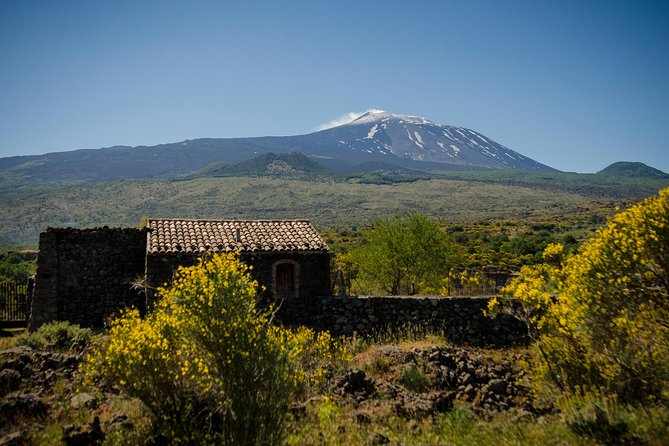 Combine free time in the foothills of Mount Etna with a visit to Alcantara Gorges and the medieval town of Randazzo! After leaving Taormina, explore the rock pools of beautiful Alcantara Gorges (own expense), and then visit Basilica di Santa Maria in Randazzo and the local market.
Sampling of typical products and possibility (extra) of personalized tastings. In the afternoon, succumb to the allure of Mount Etna and explore the hiking trails around the volcanos northern refuge at leisure. When possible, upgrade to visit Mount Etnas upper areas and take a walking tour of the craters.

Hop aboard your air-conditioned coach in central Taormina and travel to the nearby Alcantara Gorges, a series of deep incisions in the cliffs around the Alcantara River. Ancient volcanic eruptions created the gorges and now the area is peppered with deep canyons, caves and rock pools that beg to be explored.

After paying your entrance fee, head into the parkland and enjoy a short walk through the gorges with your guide, admiring the waterfalls and crystal-clear rock pools that abound. Return to your coach and relax on your journey to Randazzo, just outside Parco della Etna a scenic national park.

Basilica di Santa Maria Randazzo cathedral is the towns medieval masterpiece, so step inside and discover its beauty with your guide. Admire the columns that were built from local black lava stone and see a collection of 18th-century paintings. If you visit on a Sunday, your guide will also allow you some free time to browse the Sunday market at leisure.Sampling of typical products and possibility (extra) of personalized tastings.

Return to your coach and travel through Parco della Etna, into the foothills of Mount Etna, the smouldering volcano thats lauded as Europes most active. Travel to the north refuge point, at an altitude of 6,234 feet (1,900 meters), and then leave your coach to explore the area independently.

If you are hungry, enjoy a bite to eat and drink in the refuges cafe (own expense), and be sure to ask your guide for hiking trail recommendations. The volcanos rugged terrain matches the drama of its views, so sturdy walking shoes are just as necessary as your camera.

When possible, upgrade to skip the free time and head straight to the upper areas, instead. Optional ascent by Jeeps to the authorized crater zones at approximately 3,000 meters assisted by licensed guides of the CAI (Italian Alpine Club). Stop to admire the eventual activity of the upper craters in the area of security.
Board your coach at the pre-arranged time, and then travel back to the start point in Taormina.

The high-altitude ascents are not indicated for heart passengers, asthmatics and pregnant women.

This tour is operated in English, German, Italian. All 3 languages will be spoken during the tour.

Please note the upper craters we visit are at about 3000 meters height, the tour does not go to the summit of the vulcano