Ring Of Kerry Tour From Killarney Including Killarney National Park 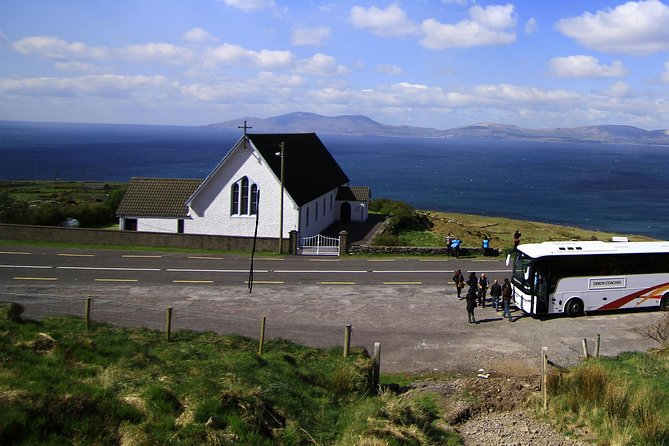 Undoubtedly Ireland's most popular scenic drive, the Ring of kerry is the name for the small highway that skirts the edge of the Iveragh Peninsula, passing along the way a panorama of rugged coastline.This 110 miles tour travels from one scenic wonder to the next.
The first stop will be at The Bog Village. This cluster of thatched-roof cottages do an effective job of demonstrating what life was like in Kerry in the early 1800s. The museum village (additional small charge, optional) has a blacksmiths forge & house, turf cutters house, laborers cottage, thatchers dwelling & tradesmanss house. Stacks of cut turf are piled by the road. There is also an old Irish pub where an early drink or morning coffee and scones may be enjoyed.

We continue through the village of Glenbeigh and a sight of Rossbeigh Beach, and a wonderful view of the hilly backs of the Iveragh.
Onwards to Waterville passing, Caherviveen, birthplace of Daniel O Connell (1775-1847) who was one of the most important political figures in 19th century Ireland. He earned the nickname "The Liberator" by leading impoverished Roman Catholics towards emancipation.
We arrive in Waterville, an idyllic beach resort between Lough Currane and Ballinskelligs Bay. For years it was a favorite retreat of Charlie Chaplin.
Lunch stop varies from day to day please check with driver.
After lunch the tour continues through Derrynane, the former seat of the OConnell clan and home to Daniel OConnell.
The next village is Sneem, another pretty but untypical village laid out English-style around a village green beneath a semi-circle of low mountains. Sneem marks the start of the most sheltered part of the Ring of kerry's coast. Here you will see lush, subtropical growth - wild rhododendrons, azaleas - evidence of the benign effect of The Gulf Stream.
Leaving Sneem, we travel through very rugged landscape and arrive at Molls Gap, where the viewing point at the gap affords sweeping views of Macgillycuddy's Reeks and Ireland's highest mountain, Carrantuohill - 3,414 feet high.
Continuing from Molls Gap to Killarney, we experience far-reaching views over the broad valley of the Killarney Lakes. Queen Victoria and her ladies-in-waiting were so enthralled by this view that it was promptly named in their honor: Ladies view. Between Ladies view and Killarney, the coach will pass through National Park and return between 5:00-5.30pm.

From May to October we assign seats on a first come service so please check at our office on 22 Main Street,Killarney prior to date of tour if possible or from 9:00am daily.We also offer Priority seating (first five rows of the coach) which is an additional charge.

This tour/activity will have a maximum of 52 travelers