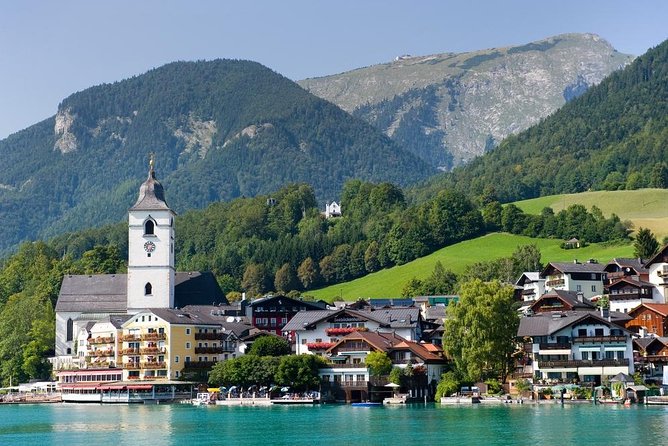 Combine two best-selling day trips from Munich to see the best of Bavaria and a slice of Austria over two days. The first day, visit the Austrian city of Salzburg, where you can see its top sights like Mozart Square and the Mirabell Gardens, and then head to Lake Wolfgangsee for a picturesque waterfront walk or an optional boat ride. The next day, youll venture north on the Romantic Road to discover two of its medieval villages Harburg and Rothenburg, one of the best-preserved Middle Ages towns in Europe. You'll have free time in every town to explore however you wish.

Salzburg and Lake District Day Trip (Day 1)
Meet your guide in central Munich and head southeast by comfortable coach to Salzburg. When you arrive after an approximate 2-hour drive, you have free time to explore the city on your own.

Walk Salzburgs charming streets; admire beautiful views of the Lower Bavarian Alps; wander around the picturesque old city; and see major attractions like Salzburg Cathedral, St Peters Abbey and Mozart Square. Enjoy lunch or drinks at a local restaurant (own expense), and discover famous sites from the classic movie The Sound of Music, such as the fountain in Mirabell Gardens where Julie Andrews and the Von Trapp children sing Do-Re-Mi.

Back on board your coach, leave Salzburg for Lake Wolfgangsee, one of the Lake Districts best-known lakes. Walk along the water and enjoy the beautiful scenery, or choose to take a boat ride (own expense) to a pilgrimage church and the lakeside town of St Wolfgang, where youll see the White Horse Inn, famous for being the setting of the early 1900s operetta The White Horse Inn.

During the return journey to Munich, pass by Lake Mondsee, which was used in several scenes from The Sound of Music.

After an approximate 1.5-hour drive, your first stop is the small town of Harburg, home to one of the oldest, largest and best-preserved medieval castles Germany. Youll have free time here to explore the town however you wish.

Back on your coach, head to Rothenburg, driving through the Swabian crater landscape and past the town of Dinkelsbuhl. Rothenburg ob der Tauber, as its formally known, is one of the most perfectly preserved medieval towns in Europe, and youll have about three hours of free time here to sightsee, have lunch and shop, if you wish, at your own pace (all food and entrance fees at own expense).

Most of Rothenburgs top sights are centered around the Marktplatz, including the Town Hall with its Rothenburg History Museum, and St Jakob's Church, a Gothic building with soaring, light-filled ceilings. If youre a Christmas-lover, you may want to check out the open-year-round Kathe Wolhfahrt Christmas Store on Herrngasse, where you can purchase ornaments, nutcrackers and other holiday items.

You will return to Munich via the Hallertau, the world's largest hop-growing area.

Entrance fee for the Castle of Harburg (approx. 5 euros)

Overnight accommodation (you return to your own hotel after Day 1 and continue with the second half of your tour on Day 2; you must have your own accommodation)