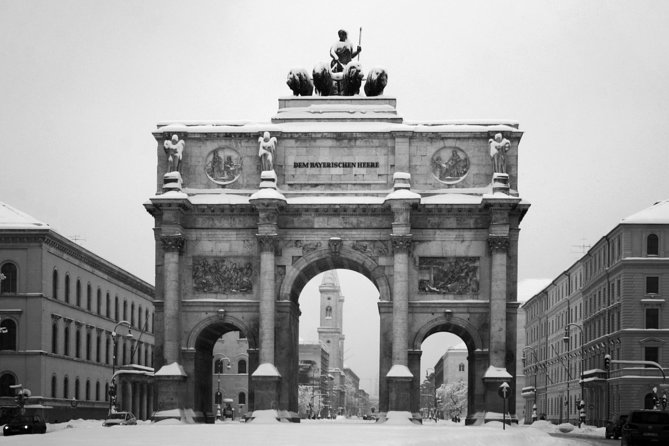 Gaininsight into the rise of the Nazi party during World War II on a full-day combo tour of Munich. The day starts with a 2.5-hour walking tour of sites associated with Adolf Hitler and the Nazis in the old town of Munich. After, you Travel to Dachau Concentration Camp Memorial Site, where the genocide of the Third Reich (Nazi Germany) started, and hear about those who were imprisoned there. See historical buildings such as the former secret police headquarters and learn all about the city during thesedark days.
Please note: the Dachau Memorial Site does not permit children under 14to attend this tour.

Munich Third Reich Walking Tour (2.5 hours):
Head to the prearranged point in central Munich once the home of the Nazi headquarters to meet your guide and then set off on your walking tour around the city.

The exact sights taken are in varied for each tour, but examples of historic buildings that you may see include the former headquarters of the Gestapo and the place where the infamous beer hall putsch of 1923 took place  the event that first propelled Hitler to the public eye.

Learn about the rise of the Nazi party from your guide and look at black-and-white photos of the city taken during the Third Reich. Your guide has detailed knowledge on the social issues and events of Nazi Germany, so feel free to ask questions and chat about sites of particular interest.

After 2.5 hours exploring the streets of Nazi Munich, make your way back to the start point where you make your way to the memorial site of Dachau.

Dachau Concentration Camp Memorial Site was known as the parent camp; it was the first of its kind, and acted as a training facility for the mass genocide that occurred during the days of the Third Reich. Today the camp exists as a memorial site, but many of its original features remain intact. Walk around with your guide, see buildings such as the bunker, crematorium and administration headquarters, and gain insight into its history.
The tour will return back to the starting point at the Munich main train station.

Round-trip transport from Munich to Dachau

Under Age 14s are not permitted to attend this tour