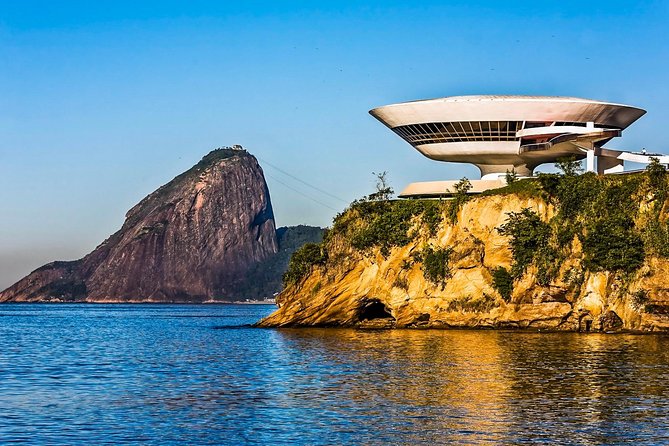 Visit two of the most famous art museums of Rio and Niteri, the twin cities bathed by Guanabara Bay, the Museum of Modern Art, designed by the architect Affonso Eduardo Reidy, and Museum of Contemporary Art, designed by architect Niemeyer.
Visit the Museum of Modern Art, and continue towards Niteroi by the Rio-Niteroi bridge, enjoying the postcard of the Guanabara Bay.
Get to know the Museum of Contemporary Art, considered one of the architectural wonders of the world.
Know the Niemeyers Path, set of architect's works that made Niteroi the second City, after Brasilia, with more structures created by him.
Feel how the MAC anticipates futures for the 21st Century through architectural communion with the stunning landscape.
Get the opportunity to observe "in loco" the two architectural styles the modern and the contemporary ones.

The purpose of this tour is to show and visit two prominent cultural institutions: the Museum of Modern Art, known as MAM, in the city of Rio de janeiro, and the Museum of Contemporary Art, known as MAC, in Niteroi also bathed by the waters of Guanabara's Bay. The MAM occupies a privileged area in Flamengo Park, where you can see the Po de Aucar, Cristo Redentor, Marina da Glria, Santos Dumont Airport, and the relief of the city of Niteri. After visiting the MAM, we will continue towards Niteroi by the Rio-Niteroi bridge, enjoying the postcard of the Guanabara Bay surrounded by natural beauties and human-made monuments such as Niemeyers Path, set of architect's works that made Niteroi the second City, after Brasilia, with more structures created by him.

The architectural style of the MAM, considered by Affonso Eduardo Reidy, follows the rationalist concept of structures leaked and integrated with the landscape. In this way, it assimilates the modern post-war trends, serving as a stage for manifestations of the Brazilian artistic avant-garde from the new realists to the Neo-Concretists. Hlio Oiticica exhibited there his work Tropiclia giving rise to the Tropicalist movement. The architect Eduardo Reidy used the horizontal and transparent structure and integrated the museum with the nature of both the sea and the gardens.

Across the Bay of Guanabara, we will visit the Museum of Contemporary Art, considered one of the architectural wonders of the world. The Museum of Contemporary Art of Niteri launches a new museum concept as a space of creation, synthesis, and unity between art, culture, and society in environmental integration. For Oscar Niemeyer, the purpose of the MAC is to anticipate futures for the 21st Century through architectural communion with the stunning landscape. "The sea, the mountains of Rio, a magnificent landscape that I had to preserve... and I went up the building, adopting the circular shape that, in my view, the space required... I felt that the museum Would be beautiful and so different from the others that rich and poor would enjoy visiting it." by Oscar Niemeyer.