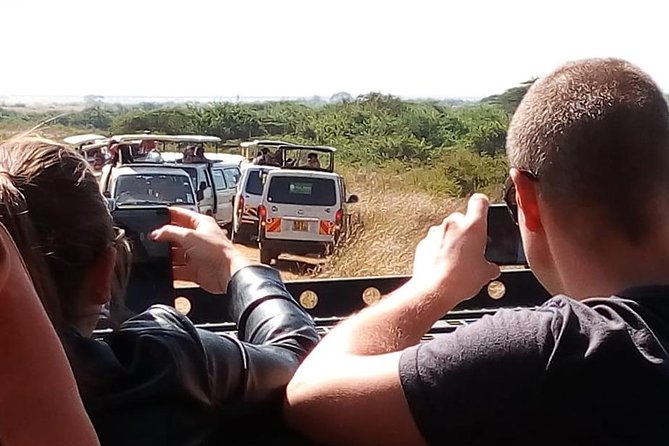 Your tour to Nairobi is not complete without a visit to lake Nakuru national park. This is a day tour applicable to all traveler on a short holiday to Nairobi or departing from Naivasha town after lake tour. 3 hours driving tour, you are assured of seeing our country side especially the great Rift valley. Lake Nakuru National park is a home to thousands of flamingos hence the nick name " pink lake". It is also home to endangered. species like the black Rhino. This is one of the best day tour and excursions organized by Kenya bush expeditions tours and travel.

Enjoy a complimentary hotel pickup from your centrally located hotel in Nairobi. Our professional driver will introduce himself in a friendly manner and offer you a brief introduction to the trip ahead. You will be ushered to a luxurious open roofed van and set off for Lake Nakuru National park with a stop at the great Rift valley view point for panoramic views and photography.
You will arrive after 3 hours drive for gate entry and game drives.

The lake is world-famous as the location of the greatest bird spectacle on earth - myriads of fuchsia pink flamingos whose numbers are legion, often more than a million - or even two million. They feed on the abundant algae, which thrives in the warm waters. Scientists reckon that the flamingo population at Nakuru consumes about 250,000kg of algae per hectare of surface area per year.

The park now (2009) has more than 25 eastern black rhinoceros, one of the largest concentrations in the country, plus around 70 endemic southern white rhinos. There are also a number of Rothschild's giraffe, again relocated for safety from western Kenya beginning in 1977. Waterbuck are very common and both the Kenyan species are found here. Among the predators are Masai lions, cheetahs and leopards, the latter being seen much more frequently in recent times. The park also has large sized pythons that inhabit the dense woodlands, and can often be seen crossing the roads or dangling from trees.
You will enjoy your hot lunch at Sarova lion hill camp. Later, you will continue with game drives and leave the park for Nairobi arriving at around 7.00pm. By now, you will have great testimonies to share.