Discover The Ancient Ruins Of Pompeii: Day Trip From Rome - With Reviews & Ratings

Discover The Ancient Ruins Of Pompeii: Day Trip From Rome 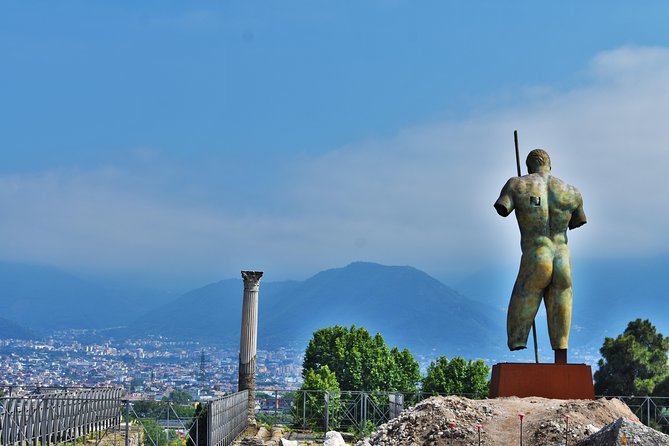 Combine a trip to Naples with a tour of Pompeiis ruins on a full-day excursion from Rome! From the comfort of your coach, see the sights of Naples, admiring the Royal Palace, Castel dellOvo, Piazza del Plebiscito and more. Hear tales of Bourbon kings who once ruled the city, and then travel inland to visit Pompeii. Stop for lunch and then tour the UNESCO-listed ruins, seeing incredible monuments that lay undiscovered for centuries.

Start your day with a pickup from your central Rome hotel or alternatively, start your tour at a meeting point in town, near Rome Termini Station. Hit the road and travel south to Italys Campania region, and as you gaze out at the pretty landscape of Castelli Romani look out for Abbey of Montecassino -- a spectacular Benedictine monastery perched atop of a hill.

After a journey of roughly three hours, arrive in the southern Italian region of Campania and head straight to its capital Naples to discover its delights from the comfort of your coach, ( a panoramic view of Naples).


Leave the city, and travel south toward Mount vesuvius, passing the towns of Ercolano (Herculaneum), Torre del Greco and Torre Annunziata before arriving in the town of Pompeii. Stop for a well-earned lunch in one of the towns traditional restaurants, and then head out to visit Pompeiis UNESCO-listed ruins on a 2-hour walking tour. Learn how the ancient city lay buried under Mount vesuvius volcanic ash for centuries and see incredible excavations of old monuments, like Teatro Grande -- a theater that once seated 5,000 people.

After your tour, head back to your coach and then travel north back to Rome. Your tour finishes back at the start point near Termini Station. Alternatively, you can make use of a drop-off at Via veneto, Piazza barberini, Piazza venezia or Piazza della repubblica; simply let your guide know on the day.

Pick up and Drop off

Please note: This is a Multilingual Tour

You must present either proof of full vaccination, proof of a Covid-19 infection in the past 6 months, or a negative test taken no more than 48 hours before the activity starts.