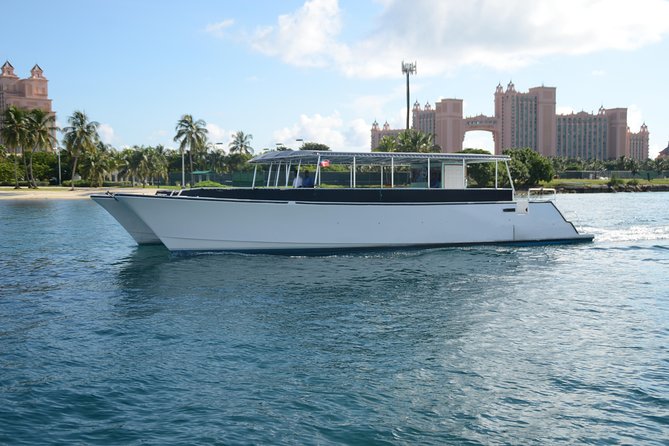 Experience the best of Nassau on this exciting tour that will take you on both land and sea. The tour is highlighted by a visit to the world famous Atlantis Resort. For the first hour and a half you will be transported on a smooth-riding catamaran through the harbor where you can take in scenic views along the waters edge. The second hour and a half will take you via air-conditioned vehicle to see the historic sites and hot spots of Nassau.

Your excursion will begin at the Prince George Dock where you will board a custom catamaran. You will start with a leisurely cruise through the crystal teal waters of Paradise Island Harbor. You will experience breathtaking views of the Atlantis, celebrity homes and mega yachts. Your guide will keep you entertained while pointing out historic sites including Hog Island Lighthouse, Fort Montagu, the Nassau Sailing Club, the Cloisters and many others.
After the cruise you will return to the dock where you will continue your adventure by boarding an air-conditioned vehicle. Along the way you will make stops at the historic Fort fincastle and visit the Queen Victoria Staircase for many photo opportunities. Your tour continues along Bay street, the heart of Nassaus shopping district and home to the Native Straw market, where you will have views of the Governors Mansion, Gregorys Arch and many other historic sites. Throughout this tour, your knowledgeable guide will keep you entertained with tales of Nassaus rich history. The tour will then continue on to Paradise Island for your final stop at the Atlantis Resort with plenty of photo opportunities.
After the stop at Atlantis you will be returned to Prince george wharf.