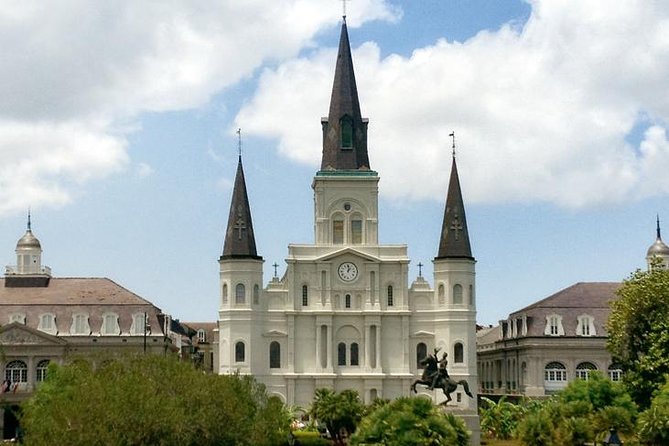 This city sightseeing tour lets you absorb centuries of history, culture, sights and sounds of the dynamic city New orleans. The famous French quarter, the elegant Garden District, and St. Charles Avenue are just a taste of what youll experience on this insightful tour.

Enjoy a grand overview of New orleans, dubbed The City That Care Forgot, on this comprehensive sightseeing coach tour. Start in the world-famous French quarter, a quaint, mysterious area where the sights and sounds abound. Head to historic Jackson square, home of The cabildo and Presbytere museums, and visit a historical cemetery, one of New orleans' Cities of the Dead. Here, discover the unique above- ground burial system. Marvel at stories of voodoo and piracy on Bayou St John, the waterway used by Jean Lafitte and his band of pirates.

Following the path of the St Charles Avenue streetcar, the oldest continuously operating passenger railway system in the world, pass stately mansions, the homes of former kings and queens of Mardi Gras and the beautiful Garden District. View Tulane university and Loyola University across from Audubon park, home to the Audubon zoo, rated one of the top five zoos in the nation.

In order to help preserve the French Quarter from vehicular traffic, it is requested that you please walk, if possible, to the convenient tour departure point, just a short stroll from most downtown hotels

Tour vehicles are equipped for wheelchair storage. If wheelchairs collapse and fold, they can be placed in the storage compartment on the coach. If the wheelchair is a scooter, then special arrangements need to be made with the supplier for a handicap-accessible bus. This must be arranged 48 hours prior to tour date. Contact details will be on your voucher.

Coaches are unable to accommodate motorized scooters. If customers are able to get off the scooter, they can board bus and leave their scooter at the ticket office.