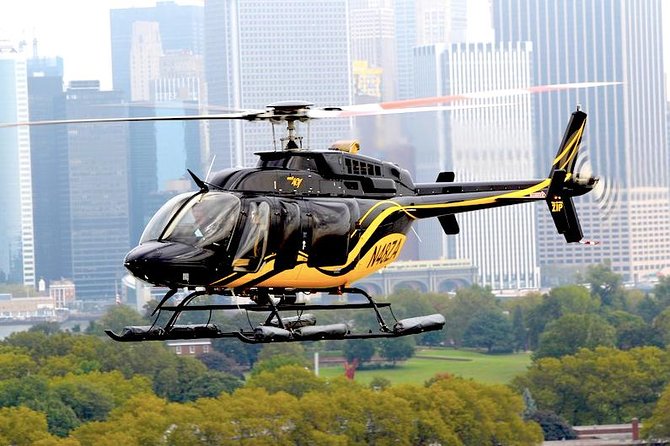 See the entire City of New York on a comprehensive 25-30-minute helicopter tour of the Big Apple! As well as the most popular sights, such as the Statue of liberty, Ground Zero and New York Harbor, you will see Central Park, landmarks like the George Washington Bridge and New Yankee Stadium from above and enjoy spectacular views over New York's five boroughs on this Grand Island helicopter tour.

Taking off from Manhattan's Downtown Heliport, you will fly past the former US Army post of Governor\'s island to get a close-up of the majestic Statue of liberty, a nineteenth century gift from the people of France. You'll then soar over beautiful Battery park to reach the site of Ground zero, scene of the tragedies of September 11, 2001.

Your flight will proceed along the Hudson river past Wall Street, Chinatown, Little italy and the bright lights of bustling Times square before continuing north to reach New York's world-famous Central park, an Oasis in the urban landscape!

Sports fans will be thrilled as your helicopter rounds the bases of the New Yankee stadium, the world's third most expensive stadium when completed in 2009. While you are in the air, see George Washington Bridge and head back over Manhattan to take in New York's world-famous skyline featuring the Empire state building, the Met Life Building and the art deco magnificence of the Chrysler building.

You'll see the Bronx, Queens, Brooklyn and Staten Island, and view the Queensboro, Brooklyn, Manhattan and Williamsburg Bridges. The aerial views of the United Nations Building and South street seaport are unforgettable as your flight brings you back to New york harbor over Ellis island, the first stop on American soil for over 20 million immigrants.

Whether this is your first time in New york city or you are a regular visitor to the Big Apple, a New York Grand Island Helicopter Flight is a thrilling way to see this great city and its five boroughs!

Please note: The listed price does not include a US $40 per person heliport/security fee, payable at the time of tour check-in.

Helicopter seating is based on a 4- or 6-passenger helicopter, whichever is available at the time of your tour

Due to comfort and weight / balance of the aircraft, passengers weighing over 250lbs (113kgs) will be required to purchase an additional seat. This is payable directly to the tour operator on the day of the tour. 300-lb (136kg) maximum weight per passenger.

Please note, audio language selection is not guaranteed and is based on availability. Should more than 2 languages be requested on the same flight, the audio commentary may default to English