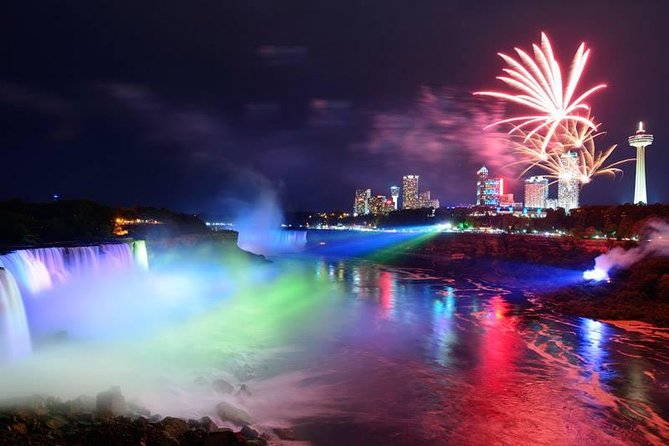 We offer Award winning Tours of Niagara Falls for last 25 years.
Experience the Falls with our Trained and Professional Tour Guides. We are premiere Niagara Falls Bus Tour company in Toronto, Ontario. We'll help you create the perfect once in a life time Sightseeing trip from Toronto to the Niagara Falls. We are offering complete full tour packages that fits in your vacation budget. Experience the wonder, the beauty, and the history of Niagara Falls we offer highly-rated, exclusive yet affordable guided tours to Canadian side of the Niagara Falls. Tours depart daily from Toronto throughout the year. End your day with an exciting (and explosive!) show of Fireworks & Illumination! The Niagara Falls Fireworks is famous for its technical brilliance and for its continued creative energy for many years. Fireworks are scheduled We have designated parking close to the Falls there which offers beautiful view of Lights and Fireworks.

Hornblower Boat cruise - Voyage to the Falls boat tour that gets you as close as possible to the magnificent Niagara Falls. Journey past the American Falls, Bridal Veil Falls and into the heart of the Canadian Horseshoe Falls aboard Hornblower Niagara Cruises.
This legendary boat tour takes place aboard a state-of-the-art Hornblower catamaran.

Stop At: Journey Behind the Falls, Niagara Falls, Ontario

Journey Behind the Falls is a year-round attraction that offers an unique view of the Falls from below and behind.
Visitors descend 150 ft. by elevator, where a short tunnel (150 ft.) gives access to two outdoor observation decks and two portals located directly behind the Falls. At Journey Behind the Falls, you`ll experience the awesome spectacle of one-fifth of the worlds fresh water crashing down to the basin below. During summer daylight hours, over 2,800 cubic meters of water thunders over the brink every second, travelling 65 kilometers per hour!
Your Journey Behind the Falls visit will take 30 to 45 minutes and in the spring and summer months, you`ll receive a free souvenir biodegradable rain poncho as protection from the mist of the Falls. Elevators descend 150 feet through bedrock to tunnels that lead and to the Cataract Portal and the Great Falls Portal which is one third of the way behind the massive sheet of water. Then you walk on to the Upper and Lower Observation Decks at the very foot of the Falls. Posters of information are a great resource of information about the history and evolution of the hallways you walk through. Journey Behind the Falls is an iconic Niagara Falls experience, make sure you take a waterproof camera. (tickets available to purchase)

The International Wine and Spirits Competition has named Reif Estate Winery as the Canadian Wine Producer of 2017 and awarded our Grand Reserve Vidal Icewine Best Sweet Wine Trophy. Complimentary Wine tasting of 3 types of Wine including award winning Ice Wine. Fruit juice served who do not drink alcohol or are under age of 18.

Stop At: Niagara on the Lake Heritage District, Niagara-on-the-Lake, Ontario

From the sensation of lift-off, to the excitement of soaring above the turbulent rapids and cascading waterfalls, your Niagara Helicopters ride is a unique and spectacular experience. Your all-scenic flight gives you a thrilling view of Niagaras natural and man-made wonders.

Scenic picture stop at Whirlpool Aerocar. The Whirlpool aero car was designed by a Spanish engineer, Leonardo Torres Quevedo and has been in operation since 1916. The cable car is suspended from six sturdy cables and offers a wonderful view of the Niagara Whirlpool which is formed at the end of the rapids where the gorge turns abruptly counterclockwise and the river escapes through the narrowest channel in the gorge. High above the racing Niagara River, you'll be transported through the air in an antique cable car. Far below, the torrent of water abruptly changes direction and creates one of the worlds most mesmerizing natural phenomenon the Niagara Whirlpool. Sometimes frightening and always unforgettable!

The Sir Adam Beck I Generating Station (GS) has provided clean, renewable electricity to Ontario for nearly 100 years. When it was opened by Sir Adam Beck on Dec. 28, 1921, the Queenston-Chippawa Development (as it was known between 1922 and 1950) was the largest hydroelectric power station in the world. At the peak of construction more than 10,000 people worked on the project.

Ocean-going ships that have curved hulls to withstand ocean conditions with deeper drafts, they often only carry a partial load when sailing the Great Lakes. They make up approx. 20% of Canal Traffic.It takes 9.4 million litres of water to fill a lock. No pumps are needed, it's all done thanks to gravity.

Your day trip from Toronto to Niagara Falls includes a visit to the Living Water Wayside Chapel - the smallest chapel in the world.

Drive through Niagara Parks' Botanical Gardens which is located on the scenic Niagara Parkway and the Great Gorge, just a 10 minute drive north of the Niagara Falls. This beautiful garden setting is home to the Butterfly conservatory and serves as the unique outdoor classroom for students attending the Niagara Parks School of Horticulture.

Journey behind the Falls (available for an additional cost $25.00 per person)

Entry/Admission - Journey Behind the Falls

This tour/activity will have a maximum of 56 travelers