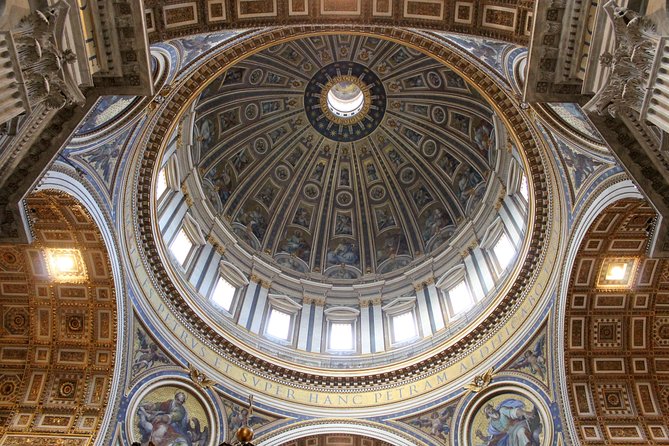 This no-wait access to Vatican museums walking tour includes all the famous tourist attractions in the Vatican like the Raphael's Rooms, the Gallery of the Maps, the Gallery of the Tapestry, the famous Sistine Chapel with Michelangelo's 'Last Judgement' and 'the Creation of Adam', St. Peters Basilica with the famous 'Piet' and much more. Your expert guide will help you to pass the long lines at the entrance. Maximum 18 people in a group mean personalized attention from your guide turning this tour into a memorable experience.

Your tour begins in the morning or afternoon at the corner of Viale Giulio Cesare and Via Leone IV, then takes you off to the Vatican Museums, offering 2000 rooms filled with the most extensive art collection in the world.

This magnificent museum complex offers galleries, showcases, paintings, sculptures, frescoes, tapestries, and classical antiquities of Roman, Greek and Egyptian origin. By choosing a guided tour, you understand detailed and interesting historical facts narrated by a professional guide that has a degree in art history or in archeology.

You will then visit Raphael's Rooms, Pine Courtyard, Pio Clementine Museum, Gallery of the Maps, Gallery of Tapestries and Gallery of the Candelabra. Step inside the Sistine Chapel to see Michelangelo's stunning frescos 'The Creation of Adam', considered one of the greatest masterpieces of Western art, and 'The Last Judgment'.

Then this best tour will take you into St. Peters Basilica by the exclusive access door from the Sistine Chapel. Here you can admire the famous La Piet sculpture made by Michelangelo when he was just 24 years old, 'Baldachino' by Bernini and many more.

Your guide will introduce you to the intriguing stories of probably the largest church in Christendom.

The tour will conclude at St. peter's square where you will end the journey of around 3 hours with great memories of Vatican Museums No-Wait Access Tour With Raphael Rooms, Sistine Chapel, And St. Peters Basilica.

Dress code is required: knees and shoulders must be covered for both men and women. You may risk refused entry if you fail to comply with these dress requirements.

Please note that it is forbidden to bring large bags and big umbrellas (small size umbrellas are allowed) inside the Vatican Museums.