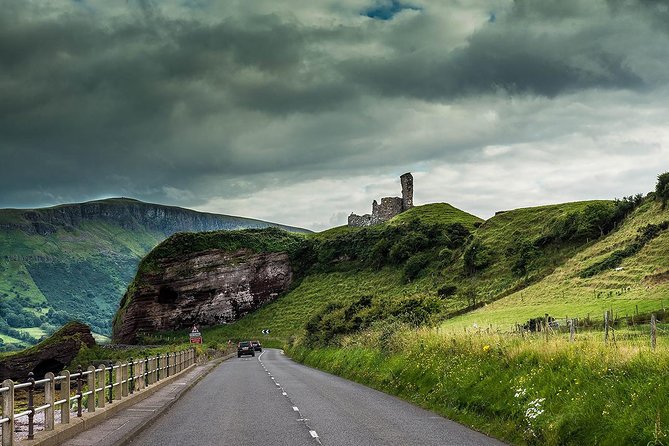 This is a full-day guided tour taking in the highlights of Belfast, the beautiful Causeway Coastal Route, the Giants causeway and Carrick-a-rede rope bridge, with a few surprise destinations off the beaten track. This tour is aimed at the visitor who has limited time to spare on their trip to Northern Ireland. This tour will give you a great taste of the variety offered by the city, the coastline, the culture and heritage on a day-long tour from Belfast.

Take a tour of the highlights of Belfast including its majestic City Hall, the grandeur of the Stormont Estate, the University Quarter and the wonderful maritime history of the Titanic Quarter.

One of the oldest and largest intact Norman Castles in Ireland, it has sat on the shores of Belfast Lough since 1177. Stop to take photos of this majestic building

Get up close with one of the few remaining Irish castles still lived in by the same family for hundreds of years. Sadly, as it is a private home, we cannot visit, but our tour will uniquely take you to an amazing vantage point above Glenarm to view this Gothic masterpiece in all its glory.

A stopover in Carnlough will reward you with views of its beautiful limestone harbour, its railway bridges, the hotel once owned by the Churchill family and of course your first Game of Thrones location of the tour.

Travel through the Queen of the Nine Glens of Antrim - an inspiration for Narnia in the CS Lewis novels - and home to the tumbling waterfalls and ancient woodlands of Glenariff Forest Park.

Before we visit Cushendall we take a stop at Agnew's Field and marvel at the sheer scale of Glenariff Glen and the ruins of the ancient Redbay Castle. The village itself has at its heart the 'Curfew Tower' and the magnificent murals celebrating the Irish game of Hurling.

This pretty seaside village is a conservation area in the ownership of the National Trust. Admire its half-slated homes in the Scottish style and the sculpture of Johann the goat and the story of his tragic end.

This amazing bay is accessed by a narrow road that winds its way from the limestone cliffs that feature as the Stormlands in Game of Thrones, to the rocky shoreline with its limestone and basalt rock features, battered year-round by North Atlantic Ocean.

We will stop at this celebrated seaside resort for lunch (depending on season) at the award-winning Marconi Bar and Bistro with its famous seafood dishes - Ballycastle being the first place to send and receive wireless radio signals by Marconi's team - then head along the coast to Kinbane.

The ruins of Kinbane Castle sit on a long, narrow limestone headland projecting into the sea, overlooking the churning waters of the Straits of Moyle, Rathlin Island and the Scottish Islands. Marvel at the tumbling waterfall and the sea caves far below the coastal path.

View the Rope Bridge from above from Portareevy Lookout Point and enjoy a panoramic view of the coastline and views across to Scotland.

The Giant's causeway is the most visited natural attraction in Ireland and is the only UNESCO World Heritage Site in Northern Ireland. With its astonishing collection of over 40,000 basalt columns, it is one of the must-see natural wonders on this spectacular coastline.

Nearly 250 years in construction, the clifftop location of Dunluce castle has attracted artists and photographers for years. One of the most impressive castle ruins in Ireland, this stop will appeal to your inner artist.

Private Tour by Car or Minivan

Driver and/or guide dependent on booking

A maximum of 3 people per booking