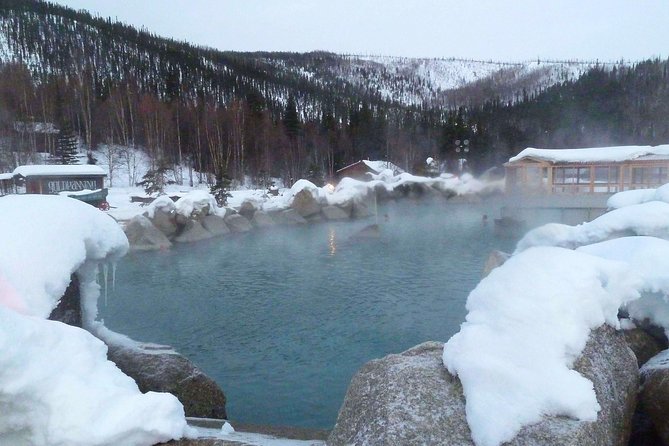 Travel with expert guides in comfortable transportation and relax in the famous Chena Hot Springs. Be amazed by the Fairbanks Ice Museum's handcrafted chandeliers and bars, and spend the evening gazing in awe at the mysterious Northern Lights.

Your evening begins at 5pm with pickup from your lodging in Fairbanks. Head approximately 60 miles (100 km) to the Chena hot springs resort. Here you'll have a chance to cool off in the incredible Fairbanks ice museum. This building, built entirely out of ice, boasts a full ice bar and chandeliers built painstakingly out of handcrafted ice.

By 8pm, you can soak your cares away in the warm and inviting Chena Hot Springs. These hot springs were discovered by natives and early miners and are still enjoyed today. The resort makes use of the first low-temperature binary geothermal power plant built in Alaska.

By midnight, begin to look out for the Northern Lights. The Northern Lights is one of the most spectacular natural phenomenons on the planet, and on this night tour, you will have the chance to see this marvel of nature for yourself. This natural light display is caused by the collision of charged particles with atoms high in the atmosphere, and the result is a breathtaking display of light that can be bright enough to read a newspaper by!

Around 2:30am, depart back for Fairbanks, where you'll arrive around 4am.

Minimum age is 5-year-old and older.

Please note the Aurora is a natural occurrence. We can NEVER guarantee that guests will see the aurora.