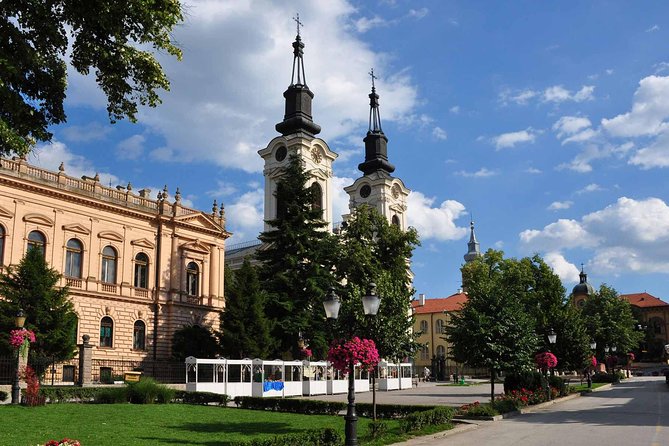 Book this excellent whole day, complete Northern Serbia experience and get to know everything about the area on this guided 8-hour tour. With live, professional guiding, in a small group, and in an air-conditioned vehicle, visit one orthodox monastery in a region known as 'The Holy Mountain of Serbia', a lovely baroque town of Sremski Karlovci, and the second-largest city in Serbia - Novi Sad. You will have the chance to feel the unique atmosphere of multi-ethnic and multi-cultural Vojvodina.

Your tour will start at your accommodation. Head toward Northern Serbian province of Vojvodina. Spend an hour of your ride enjoying the colorful landscapes of the Pannonian plain and hear stories about the turbulent history of this area. You then reach Fruka Gora, the only mountain in this region. The thick Lyndon forests served as a perfect hiding place for 16 medieval Orthodox monasteries that have nested within it.

Visit one of the monasteries and head towards Sremski Karlovci. A quiet, Baroque town where time has stopped, it will impress you with its small houses, Baroque churches, and palaces, gardens and fountains, but with its impressive history as well.

Taste two of the most famous products: the famous Bermet wine and Kuglof cakes, a touch of German tradition brought to Karlovci by German settlers in the 18th century.

The next stop is the Petrovaradin Fortress. Walk through the fortress, passing through some of its gates, and see some of the interesting places on the top of it like City Museum, Old Military Barracks, and the Clock Tower and enjoy the view over the Danube and the city of Novi Sad.

Then take a tour of Museum of Vojvodina and Dunavski park, the largest green area in the city, the beautiful Neo-Romantic Serbian Orthodox Bishops Palace, and visit the Serbian Orthodox Cathedral of St. George from the 18th century with its invaluable iconostasis painted by famous Serbian painter Paja Jovanovic.

Walk through the main street further on, enjoying the 18th and 19th-century architecture, as well as endless rows of cafes and restaurants, and reach Liberty Square, a central point in the city. Discover the Town Hall, Roman Catholic Cathedral, Finance Palace, and the Neo-Classical edifice of oldest city hotel Vojvodina. Then pass by the Serbian National Theater and reach the city Synagogue, beautiful Hungarian Secession-style building, one of the largest European synagogues to be preserved.

Take a break and enjoy some free time or a traditional Serbian lunch (at own expense), shopping and enjoying Novi Sad and, at the arranged time, get back into the vehicle and head back to Belgrade.