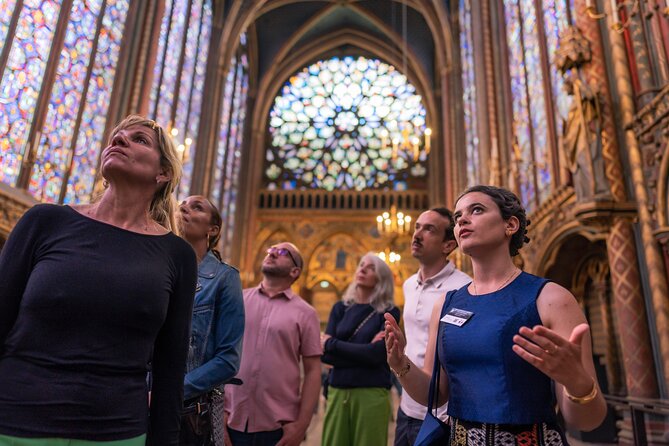 Discover the heart of Paris on this 2.45-hour guided walking tour. See the Ile de la Cit, the famous Shakespeare & Company bookstore andthe exterior of Notre dame cathedral. Marvel at the prowess of her 13th century builders -Notre Dame survived the devastating fire of April 15 2019 and a new page of her history is being written todayas we visit. Enjoy skip the line access and marvel atthe spectacular stained glass of the Sainte chapelle,and visit the final prison of Marie Antoinette - the Conciergerie.

Did you know that there are two islands on the River seine, and that Paris was founded on one of them, the Ile de la Cit? Join our guide for a fascinating walking tour of this charming and historical island, home to some of the most dazzling medieval architecture in the city.

We'll start our tour on the Left bank, in the Latin quarter, home to scholars and intellectuals since the founding of the Sorbonne University in the 13th Century. We'll pass byt he famed bookstore Shakespeare & Company, gathering place for the literary legends of the 'Lost Generation'  - Hemingway, F Scott Fitzgerald, Gertrude Stein and many others - who made Paris both their home and the artistic center of the world.

You will then see the imposing gothic structure of Notre dame cathedral. Built in the 13th century, this magnificent edifice has recently survived a devastating fire, yet she is still standing proudly as the symbol of the city. Learn of her incredible construction, the mastery of her medieval architects and builders, and watch history unfold before us as she readies herself to stand tall for another eight centuries. We will see the exterior of the cathedral, you can admire the imposing sculpted facade and bell towers, the flying buttresses still holding the structure of the cathedral together today, and learn of her glorious past, including tales of the famous Hunchback.

Then its a short stroll through the charming flower market to the Sainte chapelle, home to some of bGare de l|est-preserved and most breathtaking stained glass in the world. Built in the 13th century by the King Saint Louis, 80% of the walls are covered by remarkable colored glass windows. Once again you will skip the long entry lines, and your guide will teach you how to read the stories on these centuries old masterpieces, as you admire the astonishing multi-colored light flooding the chapel.

Our last visit is to the Conciergerie, built as a medieval palace but most famous as the prison and last home of Queen Marie Antoinette during the French Revolution. See the cells where the prisoners were kept, including the cramped cell of Marie Antoinette, where she was imprisoned until she was taken to the guillotine in 1793.

Enjoy strolling through the streets of this charming island with your guide, hear the fascinating stories of it's long history, see one of the prettiGare de l|est squares in Paris, and end your tour on the oldGare de l|est bridge in the city.

Enjoy a stroll around the picturesque Ile de la Cite

Fully guided tour including the exterior of Notre Dame Cathedral

Skip the lines to the Sainte Chapelle and the Conciergerie

Marvel at the dazzling stained glass of the Sainte Chapelle

Limited groups of 20 people or fewer

Infants aged 0-3 years are free of charge and do not require a booking.

We are compliant with international, government and local protocols and have received the stamps of approval: Safe Travels Global Tour Operator protocol, Caring Attitude Paris Tourism Commitment Charter. Our guides are informed of all measures that should be implemented during our visits.