Communism Tram And Walking Tour In Krakow - With Reviews & Ratings 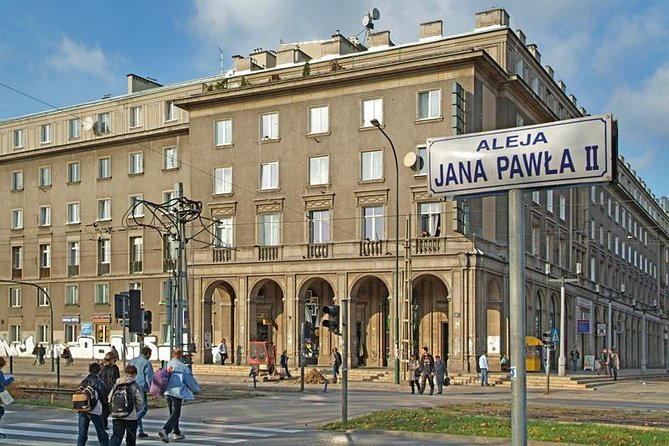 Rewind to communist days with this 4-hour tram and walking tour of Krakows Nowa Huta district. Ride a tram to this eastern suburb and learn how it was built as a model Soviet city. See the main square and tenements, view Cold War-era bomb shelters, and visit the stunning ark-shaped Lords Ark church, a symbol of Nowas battle for a church during the 1960s. Enjoy a drink in a communist-era restaurant, and learn about life under Soviet rule as well as the 1980s' anti-communism resistance from your guide.

Situated by the Vistula river, Krakow is the cradle of Polish culture anda characteristic urban phenomenon. It is the former capital of Poland, the place of coronation and later the burial ground of almost all Polish monarchs. For a long time it has been attracting scholars with the oldest university in the country, artists with the cultural climate and pilgrims with the sanctuaries and holy relics. Since the beginning, Krakw has also been enticing tourists with its atmosphere, monuments, and recently also the memory of Pope John Paul II.
The legendary founder of the city was Prince Krak, the vanquisher of the Wawel Dragon (the effigy of the beast stands at the foot of Wawel Hill). Remnants of the oldest history of the city have been preserved in two mounds dating from the 7th century called the Wanda and Krak mounds. The first historical information about Krakow is contained in a 10th-century note of Ibrahim ibn Jakub. In the book of Muhammad al-Idrisi (dating from the 12th century) Krakow is described as a beautiful and large city with many houses, residents, markets, vineyards and gardens. At the beginning of the 12th century Gallus Anonymous depicted
Krakow as a thriving metropolis and wrote in his Chronicles: Krakow, the capital city, excels all Polish cities. Krakow was founded according to the Magdeburg law (by Bolesaw V the Chaste) on the 5 June 1257. district) was inscribed on the UNESCO list of World Cultural and Natural Heritage
Sites in 1978 as the first of its kind.It is important for the residents of Krakow to cultivate their traditions such as the annual nativity crib contest or the Lajkonik wandering in the octave of the
Corpus Christi (June) from Zwierzyniec to the Main market square.
Among the many eminent people connected to Krakow are the Pope John Paul II; the Nobel Prize poets Czesaw Miosz and Wislawa Szymborska; the founder of the avant-garde theatre Cricot-2, Tadeusz Kantor; the playwright Stanisaw Mrozek; Stanislaw Lem the legend of Polish fantasy writing; Stanislaw Wyspianski a painter, poet, playwright, designer and the author of works such as the stained glass decorating the Franciscan Church; and Dr. Feliks Manggha Jasinski the benefactor of the Japanese collection displayed currently in the Manggha Centre of Japanese Art and Technology funded by Andrzej Wajda.

A living legend of communism. A flagship development from the times when comrade Stalin kept watch in Kremlin. But it is worth perceiving Nowa Huta from a different perspective as a well-designed, functional town with long and at times dramatic history that dates back to way earlier than 1940s. It was here that a golden earring from around 2 thousand years BC was found. It is here that we will find one of the oldest churches in Krakw and a mysterious burial mound erected for the daughter of the legendary founder of the city. Although socialist in its form, Nowa Huta fascinates us with its content.

Drink at the Stylowa restaurant.

no later than 24h prior to you tour.

Our guide will meet you at your centally located hotel at 9:00.

If your hotel is located outside the old town, you must make your own way

to the meeting point: the reception of Vienna House Andel's Cracow, 3 Pawia street.

Check-in at this location is 5 minutes prior to the booked tour start time.

You are required to confirm with the supplier your pickup location and arrange your pickup time no later than 24h prior to you tour. Our guide will meet you at your centally located hotel at 9:00. If your hotel is located outside the old town, you must make your own way to the meeting point: the reception of Vienna House Andel's Cracow, 3 Pawia street. Check-in at this location is 5 minutes prior to the booked tour start time.