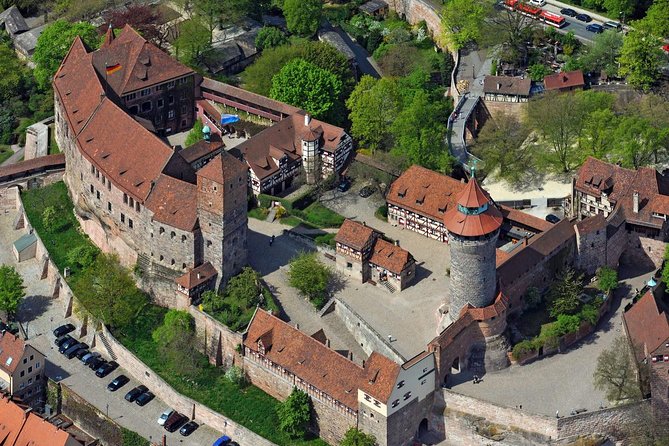 Travel to Nuremburg by train on a full-day trip to one of Germany's most beautiful cities. Enjoy a fully-guided visit of the city, as well as an optional visit to the Documentation Center on this rail tour from Munich. Nuremberg is a beautiful, old city with a vibrant history. This was where the Third Reich strutted in all of its pomp against an epic backdrop of grandiose marching grounds. It was also where an international war crimes tribunal later held that same Nazi leadership to account amidst the rubble of the defeated city.

The locations of the iconic scenes captured in films such as Triumph of the Will - the rally grounds where Hitler addressed his multitudes, the astonishing Congress Hall, the entire region designed as a "new Rome" by the architect Albert Speer - are still largely intact. We'll take you there and tell you the story.

You'll also see the other Nuremberg that locals are rightly proud of. The medieval fortifications of the striking old town, Gothic churches, colorful market places and hilltop castle of the old imperial city are as awe-inspiring today as ever.

Nuremberg hosted the Imperial Diet (or parliament) of the Holy Roman Empire and was nominated an Imperial Free City by the Emperor Frederick II. It was a center of cultural vitality at the center of major imperial trade routes. It played a key role in the Reformation, and in the printing and scientific revolutions that shaped the modern world. It was home to one of Germany's oldest Jewish communities.

The old rally grounds today host a major Documentation Center that maps all of this painful history in detailed clarity and represents evidence of Nuremberg's determination to come to terms with its past.

Our expert English-speaking guide will accompany you on the pleasant 1.5 hour train journey from Munich and back again, giving you a comprehensive tour through this unique city.