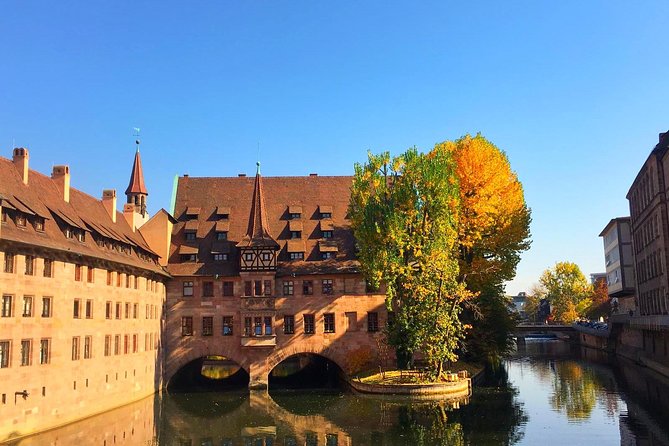 During your time in Germany, visit the famous town of Nuremberg and learn about its fascinating story on this full-day trip from Munich. Today a dynamic and lively city, Nuremberg calls to mind a history of tyrannical rule. With your expert guide, retrace Nuremberg's story and learn about the birthplace of the Holy Roman Empire of German Nations and the Third Reich empire with a tour of the historic old town. See the mighty Nuremberg Castle and the city walls, visit the churches and monuments and get an in-depth look at the tyranny of Hitler and the leaders of the Third Reich.

Board a first-class, luxury coach in Munich and drive 106 miles (approx. 169 km) north along the Rhine and Danube Rivers for an unforgettable day trip to Nuremberg. Listen as your knowledgeable guide reveals stories of Bavaria's second largest city, which now ranks among the world's safest towns.

But it hasnt always been so safe -- initially a beautiful medieval town and one of Germany's oldest Jewish communities, Nuremberg has been a center of politics for centuries. Learn about the citys history of empires from your expert guide: often referred to as the unofficial birthplace and capital of the Holy Roman Empire, Nuremberg was also the preferred residence of German Emperors in the Middle Ages.

When Adolf Hitler came to power, Nuremberg became the heart of Nazi rule, home to the Nazi leaders and center of anti-Semitic propaganda. As you tour the city, discover how at the end of WWII the city became famous for the Nuremberg trials of Nazi officials for war crimes and against humanity.

Although bombed in WWII, the medieval city centers buildings have been reconstructed and restored, replicating many medieval buildings using the original stones.

Visit the old town and grab lunch at any of the many restaurants (own expense) before seeing the main sights of Nuremberg with your guide, such as St Lorenz church, the romantic half-timbered houses in the castle quarter, the majestic Nuremberg Castle and the impressive 3-mile (5-km) historic city wall from the 15th century.

Should you visit Nuremberg between November 25th and December 24th, you may also visit the Nuremberg Christmas Markets (Christkindlesmarkt)! The Christmas Markets in Nuremberg feature nearly 200 beautiful wooden stalls decorated in red and white cloth and bearing handmade gifts and baked goods. Shop at leisure and sample the famous Nuremberg sausages before returning to Munich.

Live commentary on board in German and English