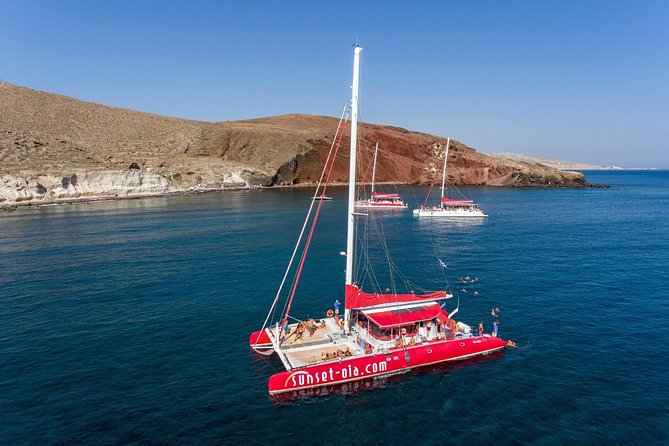 From USD 104.4
USD
Per Person
In High Demand

Enjoy a perfect sailing 5-hour tour from the magnificent island of Santorini onboard the catamaran, sailing to the most amazing sights of Santorini such as the Hot springs, Caldera, Red and White Beaches. Swim and snorkel in the crystal-blue waters of Santorini. A delicious barbecue meal is freshly prepared onboard, and unlimited drinks such as white wine, soft drinks and water will be served throughout the trip.

The voyage starts after a morning pickup from your hotel and heads via minibus to the ports of Amoudi or Athinios. From there you will sail close to Caldera cliffs and the volcano. First stop will be the Hot springs for swimming and for a mud bath for 30-minutes. After, sail close to Aspronisi, and Akrotiri to see the lighthouse and Indian Face rock.

The second stop will be an hour at the White beach for swimming and snorkeling. Enjoy delicious and freshly prepared barbecue onboard accompanied with complimentary soft drinks, water and Greek white wine. The last stop is at the Red beach, where you will have 30-minutes to swim and snorkel. We will sail inside the Caldera and close to Thirassia Island.

Barbecue meal on board

Map with extensive info on the landmarks and destinations

Jacket (to be returned to the crew)

All yachts and boats in Greece cannot moor directly on the beach.

Sunset Oia has selected the best points for swimming and snorkeling, the closest possible from the beach.