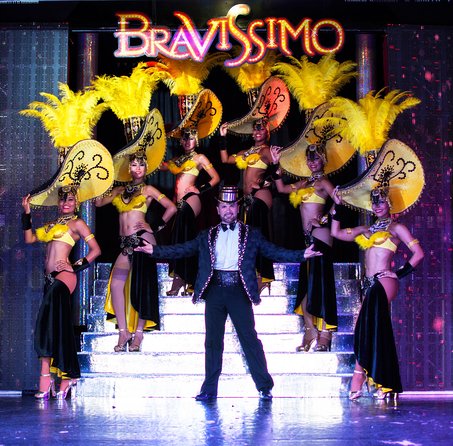 The most spectacular night tour on this beautiful island! Enjoy a delicious dinner before seeing spectacular night shows! See 'Bravissimo', a Las Vegas style show featuring dancers performing live on stage, before trying your luck at the glamorous casino!

A member of Ocean World's friendly and courteous guest services team will escort you from your hotel to the stunning casino complex where the magic of this tour begins!

Treat yourself to an exquisite dinner in a unique setting overlooking the marina and the sea. Unlimited rum and beer are included during dinner.

Enjoy preferential seating at the spectacular 'Bravissimo' show that combines Las Vegas' extravaganza with the beat of the islands. Tropical rhythms and astonishing costumes will take you on an enchanted journey through the Caribbean. Unlimited rum and beer are also included during show.

Try your luck at Ocean World casino and begin with casino coupon! Enjoy your choice of the best table games and loosest slot machines in an elegant surrounding.

Modern music, great ambiance and lots of dancing await you at the Lighthouse lounge and disco, from where you will admire the spectacular and dramatic scenery of the Atlantic Ocean.

A fantastic night out and a must do for anyone visiting the Dominican Republic!

Round trip bus transfers (surcharges apply for some hotels)

Unlimited wine, rum and beer during show and dinner

Dress Code: Casual or Semi-Formal. Shorts and flip flops (sandals) are not permitted

Please Note: this tour is not available to cruise ship passengers