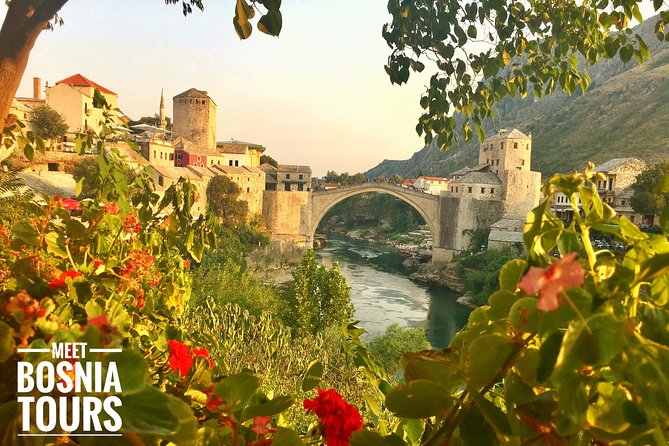 Old bridge of Mostar and four pearls of Herzegovina is a full-day tour for a small group from Sarajevo to Konjic, Kravice waterfall, Pocitelj, Blagaj and Mostar. Herzegovina is a must see location for anyone visiting the Balkans. Herzegovina tour enables you to visit five interesting places. That is why we have designed a tour which offer most of it from perspective of cultural diversity and unique history, truly amazing scenery and as well as delicious.

Join us for this amazing, UNESCO based trip and get to see Herzegovina region attractions. Old bridge of Mostar and four pearls of Herzegovina tour starts from Sarajevo, but can be arranged from elsewhere, if requested.First stop of the day is short visit to old part of Konjic town. Konjic is known by The Old Stone Bridge, which connected the banks of Neretva river since 1682. It has been on the list of national monuments of BiH since 2003.As Bosnia was the scene of some of the fiercest battles between the Yugoslav Partisans as well as the Axis Powers during WW2, the next stop on the way is in Jablanica. It's a small vilage famous about its bridge and the Battle of Neretva where the Partisans managed to win a very unlikely battle.Then we continue through some really amazing parts of Neretva river canyon, telling the unique stories of Herzegovina, before we arrive to our next stop - Kravice. Kravice is a waterfall on the Trebiat River in Bosnia and Herzegovina. It's a mini version of Niagara Falls, hidden in the Balkans. For its amazing beauty and untouched nature, it's protected by Bosnia and Herzegovinia as a natural rarity. Aftet enjoying Kravice, we keep going, and after short ride arrive to Pocitelj, the stepped Ottoman-era fortress village of Poitelj is a medieval and Ottoman-Mediterranean wonder of nature and architecture, a place like no other. Cupped in a steep rocky amphitheatre, it's a warren of stairways climbing between ramshackle stone-roofed houses and pomegranate bushes. Since the year 2000, the Federation of Bosnia and Herzegovina Government has placed the village under a Programme of Permanent Protection. Poitelj has a magical air that transcends time. It is a place just to wander, get lost in thoughts, and feel a profound sense of wonder and serenity.Next destination is Blagaj - a haven of peace and natural harmony. The Blagaj Tekke, or the Dervish Monastery, was built around 1520. The monastery is an important monument of the early Ottoman period in Bosnia & Herzegovina. The Blagaj Tekke is situated by the spring of the river Buna, surrounded by beautiful mountains. In the silence of the Dervish house garden, cooled by the freshness of the wonderful river with the most spectacular view, you will understand why Blagaj was the focus of interest of historical personalities, Roman nobility, Ottoman viziers and kadis, Austro-Hungarian officers and many travelers searching for the freshness of the water, warmth of sun and blue skies.In the end, it's time for Mostar experience - one of the most important pearl of Bosnia and Herzegovina. A city of stone on stone, historical, political, scientific and cultural center of Herzegovina lies at the foot of the slopes of Velez Mountain, in the Neretva River valley. Our professional guides will accompany you to the Old Town. This is where you will find the famous bridge and the largest concentration of historic and cultural sights.